A thread on MNSpeak has taken a strange turn in recent weeks as friends or Marsh, and perhaps witnesses to his murder have jumped into the conversation. 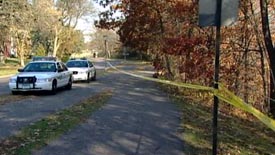