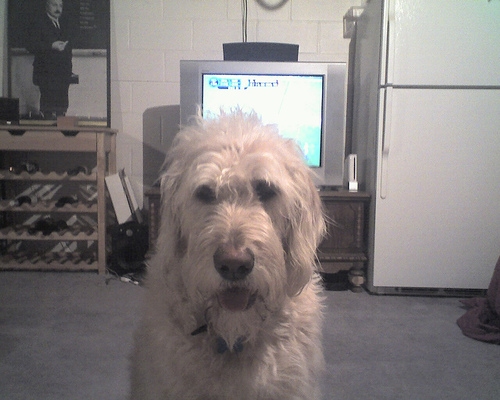 Hank Deitch is so disgusted with the Bears that he can’t even watch.

Down in front, Hank! The Bears are down but not out.

The year was 1984 and the Bears were going to the Superbowl. Walter Peyton was at his prime and The Fridge was getting more press than he deserved. Hey Ditka, it should have been Walter carrying it in from the red zone.
The Kohler’s, as in my parents, brother and I, got our first VCR in December of 1983. I read the manual and figured how out how to program it to record the Superbowl and pregame (6 hours total). I don’t think anyone watched it other than to verify that programmed recording actually worked. It did.

Now that the Bears have recovered from 23 years of rebuilding, I hope they’re victorious again tonight.

And I hope Prince doesn’t show any nipple during the half time show.

Anil Dash has put together a catch-up for those who haven’t kept up to date with Prince lately:

Most everybody who knows me well knows that I’ve been a fan of Prince for pretty much my entire life. So when casual fans or non-fans hear that Prince is playing the halftime show at the Superbowl this year, they ask me, “What’s up with that guy?” or “Is his name still a symbol?”