prescription for viagra milano cipro low cost how to wean off venlor viagra online shop.ie purchase Exelon when does clomid get out of your system kamagra store coupon code samples of excellent testimonials
Skip to content

I’ve been having a lot of conversations with fellow and future MPS parents about the MPS Comprehensive District Design and thought I’d jot down a few takeaways here.

Note: if any of my language regarding race is outdated by 2020 standards, understand that I’m a mid-40’s white guy who’s trying to keep up. Shoot me a message or leave a comment if you have any constructive feedback about that.

The motivation for change appears to be primarily financial. If your budget is shrinking, or at least not growing as fast as costs, you clearly need to do something about that.

Why is there a budget challenge? Because fewer school-aged children in Minneapolis have been attending Minneapolis Public Schools than in the past. There are a variety of alternatives, with charter schools, nearby districts, and private schools being three common ones.

Every time a student leaves the district a lot of money leaves with them.

So, if you want to close the budget gap you have a few options. Those include cutting costs, raising additional revenue, or stopping/reversing the enrollment trend.

If you wanted to reverse declining enrollment what would you do? Perhaps talk to the families who are leaving the district to ask them why they’re leaving? That’s what MPS did. And they found that the families leaving are largely African American, Hispanic, and East African immigrant families. And they found that the reasons they’re choosing to leave the district are primarily:

This – to me – is critical to understanding the proposed changes.

I had a chance to attend a recent CDD meeting at Justice Page Middle School. The auditorium was packed with parents interested in hearing about the plan. Here is Justice Page’s racial breakdown:

I note that because the attendees at the meeting were around 98% white. The questions asked were fine but none of the questions asked addressed the three bullet points I listed above. Thankfully, MPS appears to be seeking out feedback from families who don’t/won’t/can’t attend public hearings. This is great because a major flaw of public meetings is that the attendees often falsely believe that the opinions shared at the meetings reflect the opinions of all stakeholders.

The question that came closest to hitting those bullet points was something like, “How are the proposed changes going to improve the racial integration of our schools?” This is a fair question but I don’t think it’s hitting the core concerns of the families who are leaving. As I understand it, they’re not leaving because the schools they attend aren’t integrated enough, or that they (families with non-white students) aren’t attending schools with enough white students.

Increased school integration does not appear to be at the top of the list of concerns among families leaving the district. Here’s one possible scenario: a Somali family lives in a part of town where they’re not particularly impressed with their neighborhood school so they choose to put their kid on a bus across town to a school that’s known for having better results. Their kid doesn’t feel welcome at that school and comes home crying after being picked on during long bus rides. The school may be a good school on paper but the experience for that doesn’t mean that it’s a great experience for all students. So, that family looks at other options and they find a charter school that welcomes Somali families. The parents think, “This school may not be any better than where my child is going now, but at least they’ll feel welcome at school and not come home crying.”

The CDD is a big change and certainly disruptive and any time there’s change there will be people who reevaluate all of their school options. This includes families who are really happy with the status quo. If boundary changes will redirect your children to schools that weren’t your first choice, or a magnet school you love is being demagnetized and turned back into a neighborhood school, those are reasons for concern.

For example, if Spanish immersion is a must-have for a family and scaling back or moving Windom’s program is a deal-breaker, that could cost MPS some students. Dowling’s current environmental program was cited at the Justice Page hearing. A representative from MPS said that it polled poorly among magnet choices. There are families who love Dowling today because it has the environmental program, the Special Needs program, the large campus, the integrated student body, and the success of students in that environment. The bet the school board is making is that the white families who attend schools like Dowling will still have great academic options available for their kids.

I don’t know. To me, it sounds good on paper. It sounds like MPS has identified the root causes of why families are leaving and has a plan to address those concerns.

I’m concerned about whether the disruption involved in centrally locating magnets is too much. A successful magnet program needs to have a strong emphasis and a strong brand to convince families living within walking distance of good schools to put their kids on buses. We know that families will do that once they’re convinced that a program is good, but that doesn’t happen overnight. At least not without a strong market program that convinces families that the school will be a strong school on day one.

I’m concerned that charter schools are offering programs that the CDD doesn’t fully address. If, say, Somali families are leaving for Somali-specific charter schools, the CDD may not be going far enough to address those concerns. Focusing more on community schools – and, hopefully, giving those schools the resources they need to succeed – could be a step in that direction, but does it go far enough?

I’m concerned that middle/upper-class white families will defend the status quo that has served them well at the expense of change that would help underserved families and the citywide budget challenges.

I’m concerned that middle/upper-class white families underestimate how good their neighborhood schools are and will irrationally opt-out of a system that would serve their children well.

The StarTribune published the 2008 Minnesota School Test Scores on their site last week, but it wasn’t in a format I found particularly valuable. Rather than alphabetical by school, hot about being able to sort by performance?

So I put that together in a spreadsheet, which can be found below, or at this link. Note that there are 4 tabs. The first combines all metro schools (Public, Private, and Charter). The other three provide the stats by type of corporation (not sure that’s the right term for it).

The results are currently sorted by math proficiency percentage. Controls to scroll left/right can be found at the bottom of the chart.

1. Edina was the top public school.

3. Delano ranked 4th among publics, which came as a surprise to me since I associate Delano with KQ’s Terri Traen.

4. I’m surprised how many students in Stillwater are enrolled in charter or private schools considering how good the public school is. Of course, privates and charters do well too.

5. Privates beat publics, but publics beat charters. I imagine that the students who end up in private schools come from above average families motivation-wise. But what’s the deal with charters (on average) underperforming publics?

My flight from Toronto yesterday afternoon approached MSP over Stillwater, along I-694 to Maple Grove, then made a U-Turn taking things toward the airport from the West starting around Wayzata.

While heading East, I grabbed shots of three high schools and their athletic fields: 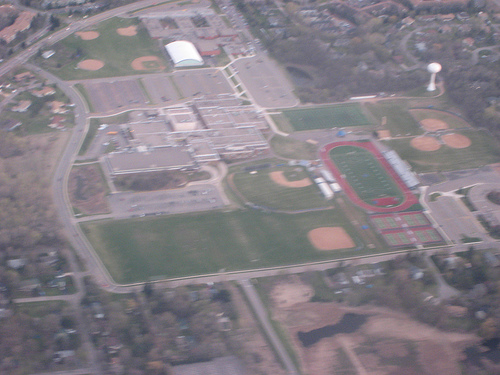 St. Louis Park (Flory, is your new house in this photo?): 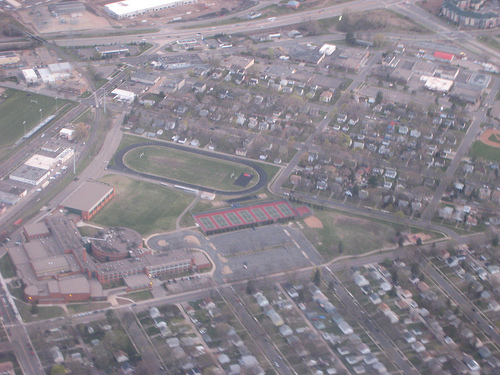 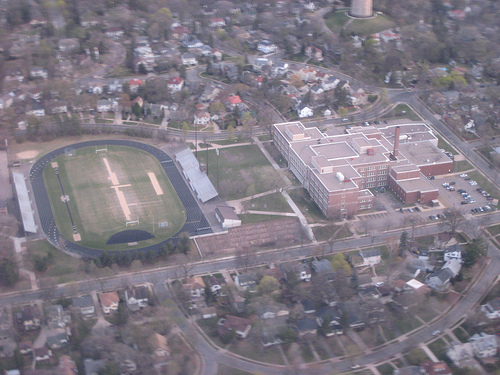 It’s interesting to see how the acreage gets progressively smaller as I moved into the city from a 2nd and 1st ring suburb. What’s funny is that while Hopkins dwarfs Washburn for field sizes, it’s nothing compared to what Eden Prairie or Chaska have to offer.

Looks like Mrs. Perfect’s been busy reporting on all the dangers we face in the world today. Last time, it was the dangers caused by women holding positions of power in the Catholic church, which is someone ironic coming from a woman in some sort of a non-official role associated with the church.

Now we hearing from Mrs. Perfect (seriously, that’s her real name) about the dangers our children our face when educated by a gay teacher who happens to read a story about a child with two mommies like Mary Cheney’s child will have. Apparently, the teacher mentioned that he plans to adopt a child. Imagine the . . . um . . . horror?

I figure you probably think I’m making this up, so head on over to mfc.org to see the story. Here’s a link to it, but it looks out of context with no navigation when linked to directly because their web site was probably built by someone who went to a school that didn’t have science, and computer science was close enough to be considered dangerous.

Back to the story: It’s stuff like this that makes me understand why such a large percentage of home schooled children are indeed home schooled. There is simply no way parents who are offended by something so mundane could make it through a school year. If parents think there children are being harmed by hearing reality based stories read by teachers, or personal stories about adoption, they’re going to need to shelter their children.

Both parties win through homeschooling. Schools can get back to educating children rather than dealing with irrational controversies, and parents who will never be satisfied with schools that focus on educating their children the only way they see fit.