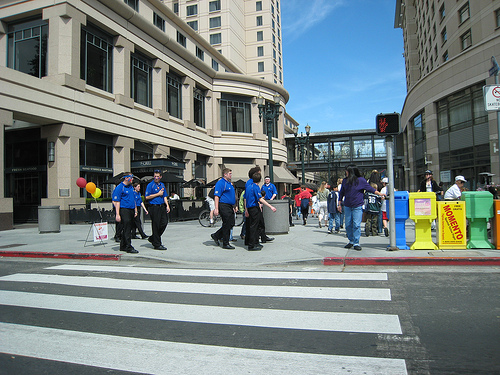 The Jayhawks are Coming, originally uploaded by edkohler.

The Western Regionals of the NCAA basketball tournament is at SJSU. Time to get outta this town.

Lots or Oregon fans are milling around too, but they don’t seem as confident. The Kansas crowd must be believers to travel that far. Or they’re jusy crazy.

Thanks to Governor Tim Pawlenty’s underfunding of transit in Minnesota in an attempt to maintain his “no new taxes, and . . . um . . . fees aren’t taxes” pledge, I was feathering my clutch across town this evening listening to Bumper to Bumper with Barrerio on KFAN where I heard about a Star Tribune story abotu teh NCAA’s interest in banning male players from practicing with women’s teams:

“But last month, the NCAA’s Committee on Women’s Athletics (CWA) called for a ban on male practice players. It concluded the custom violates the spirit of gender equity and Title IX, the 1972 federal law banning sex discrimination in sports.”

Imagine if your daughter was a kick-ass basketball player. Do you think it would be easy for her to find other kick-ass women players at her level who could push her to make her the best player she could be. Now, imagine what it must be like for the women at the University of Minnesota, who are the best dozen women basketball players within hundreds of miles. Luckily for those great athletes, there are local basketball players who can push them to improve: guys. And they’ll work for free.

The NCAA doesn’t seem to realize that women’s sports have reached a point where they’re established and well beyond numbers and participation. Of course, there are plenty of exceptions to that last statement, but it doesn’t change the fact that limiting the competitiveness of women’s practices actually HURTS the competitiveness of women’s sports rather than helping them.