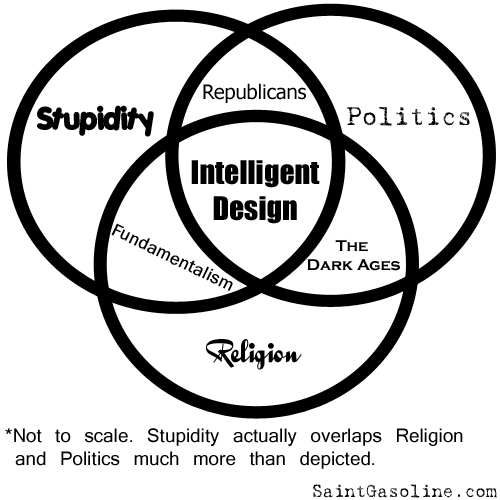 It seems like politically correct speech is generally thought of as something one does to avoid offending people due to their race, religion, gender, sexual identity, etc. However, one group that I hadn’t thought of grouping with that class is Intelligent Design believers. But, after reading Matt from Where the Hell is Matt? YouTube video fame’s FAQ, it seems like they qualify:

Where the Hell is Matt?

“Why didn’t you die from jellyfish stings in Palau?

There is a place in Palau called Jellyfish Lake. Long ago, the lake connected with the surrounding ocean, but at some point it got closed off. Without any predators to worry about, the lake’s jellyfish population evolved — oh, I’m sorry, “intelligently designiated” — to lose their stingers.”

I thought it was very kind of Matt to provide both a scientific and ID explanation for why the jellyfish in Jellyfish Lake don’t have stingers.

If you really want to be politically correct when speaking with intelligent designers, remember to refer to gravity as ‘Intelligent Falling’:

“Things fall not because they are acted upon by some gravitational force, but because a higher intelligence, ‘God’ if you will, is pushing them down,” said Gabriel Burdett, who holds degrees in education, applied Scripture, and physics from Oral Roberts University.