“I want you to see what I see,” says Beauty Turner, after leading the group off the bus to a weedy lot where the Robert Taylor Homes once stood. “To hear the voices of the voiceless.”

Turner, a former Robert Taylor Homes resident, has been one of the most vocal critics of the Chicago Housing Authority’s $1.6 billion “Plan for Transformation,” which since the late 1990s has demolished 50 of the 53 public housing high-rises â€” including Cabrini-Green â€” and replaced them with mixed-income housing.

City officials have heralded the plan. But Turner believes the city once accused of leaving residents to be victimized by violent drug-dealing gangs is now pushing those same people from their homes without giving them all a place to go.

It’s interesting to hear Beauty Turner’s perspective on things. She’s upset with the city’s plan to replace the projects with new mixed-income housing. From her perspective, this is hurting the previous residents who’ll be pushed out by the new, costlier, housing.

Debates like this are not unique to Chicago. Minneapolis is having similar debates in areas of Phillips where new housing is going in, as well as in some areas of the North side. 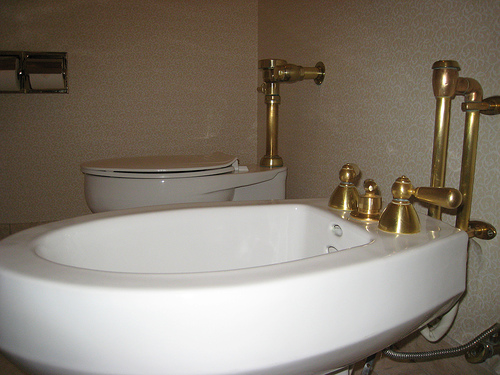 I Feel Like A New Man, originally uploaded by edkohler.

Walking back to my hotel room after hanging out in a billionaire’s hotel suite. The biggest differences in our accomodations are:

– one of these butt cleaner things from France