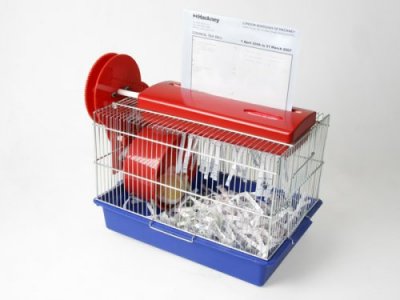 My biggest concern is, what happens if the hamster is in the process of shredding multiple pieces of papers and hits a staple?

Does he suddenly run loops on the treadmill?

via Triumph of Bullshit

If anyone in Los Gatos or St. Helena today asked me, “Who the hell are you?” I would have said, “Ed Kohler, duh.” If that didn’t ring a bell, I would have explained to them that they may not have heard of me, but I’m big in Minnesota. For example, The Deets was the Minnesota Blog of the Day on the CityPages Blotter yesterday. And I quote:

Damn straight. That’s an interesting snapshot into what The Deets is all about. It also reminds me of a conversation I had with a friend about String Brie way back in almost November. She suggested that snackable brie should come in squeezable tubes like GoGurt. She’s either on something or onto something there.

The hamsters powering The Deets’s servers wished they had a lighter lunch before the insane traffic spike generated by CityPages. They claimed they were a whisker away from calling PETA.