A friend of mine who’s close to having kid #1 asked me about this. I don’t know much about about this topic, but have some recent experience so here it goes:

Anything you wish you’d done differently during the first weeks?

Pack your bag now. Sasha arrived a month early and I ended up a little under prepared clothes wise at the hospital.

The chair that converted to a sleeper for dads was pretty bad. If I did that over, I would bring my camping mattress which isn’t great but is at least level when on a level surface.

Friends really want to lend support but also worry about being too intrusive. It’s tough to schedule around feedings and getting rest, but if you put a friend or two on call for a visit each day you’ll get a chance to have an adult conversation.

Take some video of your newborn in the first few days. They will never sound like that again.

Is there anything you are SO thankful that you had done?

I brought my briefcase with me which worked out awesome since I roll with a power strip and extension cord. There are a lot of outlets in the rooms, but not necessarily where you’d like them.

If there is somewhere you can grab food other than the hospital, do it. Order something in or ask a friend to hook you up if there isn’t anything good nearby.

Sasha was born a bit early and needed to put on some weight. We were very strict about tracking how much she ate, which gave us confidence that she was on the right track. It may have been a bit obsessive but it gave us peace of mind.

Get out of the house. Sasha can sleep through just about anything. She’s been out on a ton of long walks, for dinner, to visit friends and relatives.

That said, don’t be afraid to say no. You’ll be more tired than you realize.

Amazon is super convenient for just about anything you could need.

Swaddling is awesome. Kids love to be snug.

Act competent at the doctor’s office. I think this is the path to VIP service.

My take on this is that her metabolism is increasing faster than her stomach’s capacity. Here’s my approximation of those two variables based on how much we can get her to eat: 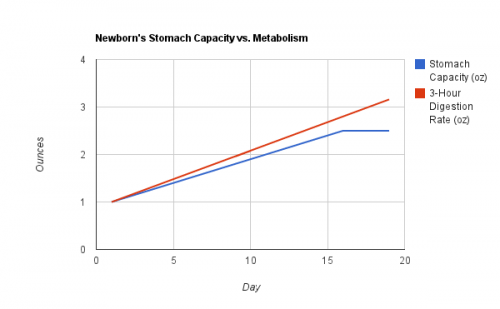 That widening gap is leading to shorter feeding cycles. Here’s a look at how this has been sneaking up on us: 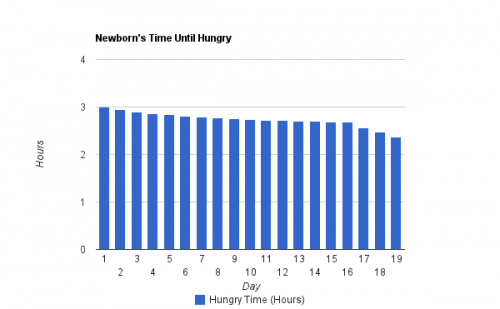 If this trend continues we’re pretty much screwed.