I’ve mentioned before that law enforcement would be better off using the existing online platforms to police their local adult services industry rather than pretend that shutting down a website will make it go away. As I see it, the web provides less anonymity than, say, street walking where people meet anonymously with no electronic records. For two people connect through a website, email or phone needs to be used (unless the prostitute puts their physical address in the ad, which doesn’t appear to happen since they likely prefer to screen their customers).

Which brings us to Roseville, Minnesota. It turns out that Roseville’s cops figured out how to use Backpage to find escorts operating in the city and solved their escort problem. How did they do it? They searched for “Roseville” on Backpage and set up appointments with local advertisers then stopped by for a visit to the local motels they were using to run their businesses. They also cracked down on customers visiting the escorts.

Think about this: While sitting behind desks, police officers were able to determine where escorts were working in their city. Roseville cops focused on the problem and used the same technology used by the escorts to solve it.

Perhaps politicians can learn something from this? 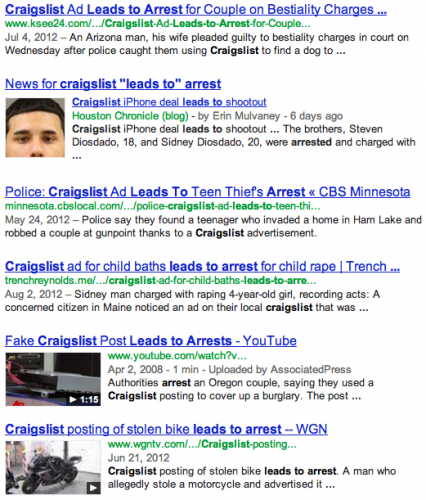 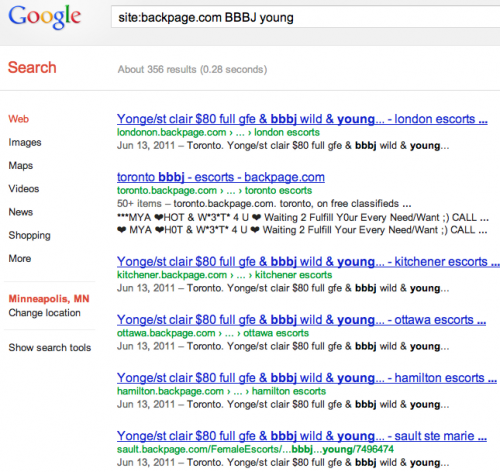 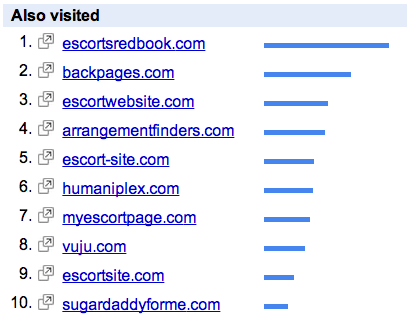 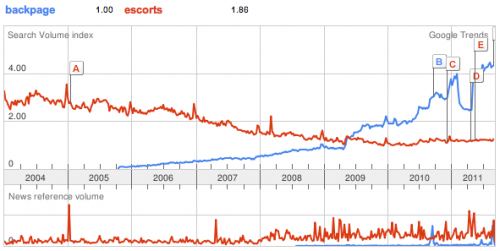 Back in early September, I mentioned that it’s pretty ridiculous to think that the work state attorney generals did to get Craigslist to shut down their adult ads would have any deterrent effect on people interested in selling adult services. At the time, I suggested that Backpage.com was an obvious next stop for people advertising such services, among others, and that this is a game of whack a mole where new sites can pop up over night.

Additionally, many of those sites may be less willing to cooperate with law enforcement than Craiglist was, which could mean that the AGs actions have actually made it tougher for local law enforcement to figure out who’s behind the ads.

One interesting stat on this is to look at whether Backpage benefited traffic-wise from Craigslist shutting down their adult services section. September was the first nearly whole month where Craiglist was adult services ad-free. With that in mind, here’s a look at the monthly visitors to Backpage through September:

Looks like September was a good month for Backpage with traffic up 15.8% month over month. For comparison, here is what things look like for Craigslist.org:

Down 2.4% month over month, according to Compete.com. It’s worth noting that the scales on those two graphs vary. By Compete.com’s measure, Craigslist is the 13th largest site in the USA while Backpage is 579th (while doing a brisk business in escort ads these days).

We can all thank the 17 state attorney generals who solved the prostitution problem in America by pressuring Craigslist into shutting down their Adult Services classifieds category.

Well, as I mentioned earlier this week, the web is nearly infinite, so shutting down any given site will have little to no impact on escort advertising.

Currently, one of the most popular alternatives to Craigslist for “Adult Services” advertising is Village Voice Media’s classifieds site, Backpage.com. I counted the number of Escort Ads posted in Minneapolis over the past 9 days, and found this: