I’d forgotten about this encounter with the Minneapolis Police Department’s 3rd Precinct from early May of 2020 but stumbled across it in some old pictures today.

I was leaving the Dollar Tree near Hiawatha and Lake on May 5th, 2020 when I heard a car alarm blaring. Nothing that out of the ordinary so far, but what was a bit different was that a guy was reaching into a car parked next to Cub Foods through the passenger window and rifling through the glove compartment of the car with the alarm blaring.

There happened to be a Cub employee out on her smoke break a few yards away from where this was happening. She asked him is it was his car and he said yes. But, he also decided to leave that car and start crossing the large parking lot to the west.

I asked the smoker if she had called 911 and she had. She said that she needed to get back to work so I said that I’d keep an eye on the guy and for the cops that should be arriving soon. There is a direct line of sight to the 3rd Precinct a block to the South from this point.

I watched the car thief walk west to just North of what’s now a Planet Fitness, and what did he do? He started breaking into another vehicle. I snapped a pic of that situation then called 911 to give them an update on where the car thief was. 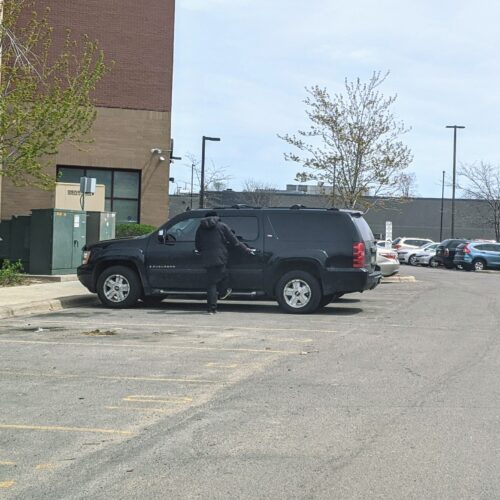 I mentioned to the 911 dispatcher that I was currently watching the thief attempt to break into another car. 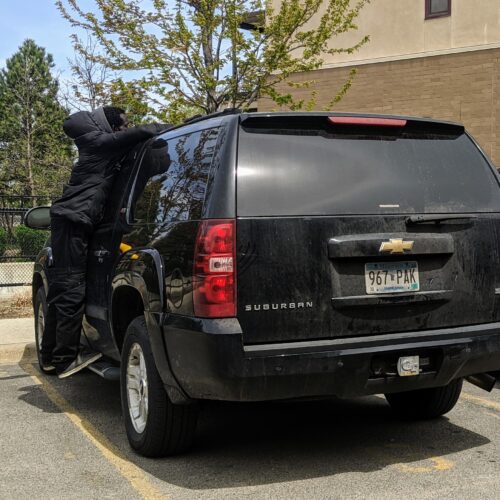 At some point, the thief noticed me and decided to act like this was all totally normal behavior and slowly meandered South past the stretch of businesses and Target down to Lake Street. While he was walking that way, a squad quietly idled up so I flagged it down and asked if he was here for the 911 call about the car break-ins. He was. So I told him that the thief was around 100 yards South of us by Lake. The cop then asked where the car was that the thief had been breaking into, so I pointed to the two vehicles. The cop then chose to . . . go to one of those vehicles rather than to the thief.

I decided to keep an eye on the thief, so I went down to Lake. The thief was sitting on the steps of what was then an Arby’s (it was burned down later that month during the riot following a murder by a member of the MPD’s 3rd Precinct). Yes, he was sitting right next door to the MPS 3rd Precinct’s parking lot.

After sitting there for around 5-10 minutes, I called 911 to give them an update on where the thief was. I mentioned to them that I had talked to a cop, and that the cop did nothing. They said that they’d look into it.

Another 10-15 minutes passed and the guy remained there but a cop never came out of the precinct to address this.

On the plus side, I’m thankful that my 911 call didn’t lead to Derek Chauvin responding to the call while training some junior officers on how the way things are done in the MPD.

On the downside, this was a lay-up. A crime was in progress within sight of their own precinct and they couldn’t be bothered to even talk to the person who was breaking into multiple vehicles.

Does it take a squad car, a gun, and a badge to handle 911 calls this poorly? I don’t think so. Surely, there are cheaper ways to do things this incompetently.