You know how once you buy a new car you start to see that same make and model of car wherever you go? Having solar panels is kind of like that. I now tend to notice every new solar installation going in around the neighborhood. And, a lot are going it. The pace is picking up.

But, how many are there? Why not count them? So I did. I started with Google satellite view. Panels are pretty easy to spot from satellite images. I started boxing out the blocks where I found at least one property with panels (electric or water). The satellite data appears to be pretty recent, but not recent enough to capture many of this summer’s installations so I also biked around the neighborhood to see if I could find any more, and I did.

Here’s what I found:

If you know of any blocks with at least one solar panel installation that’s not on the map let me know. Or, if I have any false-positives also let me know.

1. I wasn’t the first on my block. A neighbor beat me to it by a few years.

2. The distribution throughout the neighborhood is pretty good. The panels aren’t grouped just among areas with higher priced homes. I imagine this is because solar has become quite affordable, and some solar companies are offering financing plans with little to no money down.

3. There are no panels on any homes along Edmund (the residential street along the parkway). This appears to be due to a combination of things including trees, house alignment, roof alignment, and style of roofs. But, there certainly are some good candidates for solar there.

4. Most of the new single-family homes being built in the neighborhood (that’s the only type of home we legally allow these days) are large, tall, and built in an east-west alignment so are great candidates for solar. There tend to be no trees competing for light on their roof, and wouldn’t be for at least 30 years if one was planted today. And, due to height restrictions in place now and under the Minneapolis 2040 plan, they don’t have to be concerned about losing their roof light. Also, putting panels on a roof is best when a roof is new. It doesn’t have to be brand new, but you wouldn’t want to put panels on a roof that’s going to need to be replaced soon. So, get on that if you can.

5. There are a couple sleeper solar installations in the neighborhood. Nearly all solar installations can be seen while driving by but there is energy being made in Longfellow in places that can’t be seen from a street. These include on top of Ghandi Mahal restaurant and solar PV and water installation on the back of a house along 47th Ave.

6. Our public buildings are great candidates for solar. For example, Howe Elementary could likely support 15-20X more solar production on its roof than a typical residential installation in the neighborhood. It turns out that there are creative ways to get systems like this built in order to generate energy savings for the school with no upfront costs. If Farmington, MN schools can do it, we should be able to get it done.

7. Target has a ton of solar installations nationwide, but not on our Target. They may want to make that happen in order to stay ahead of WalMart for deployed solar.

8. This Longfellow resident has a creative solar installation that combines roof-mounted panels with panels used as awnings: 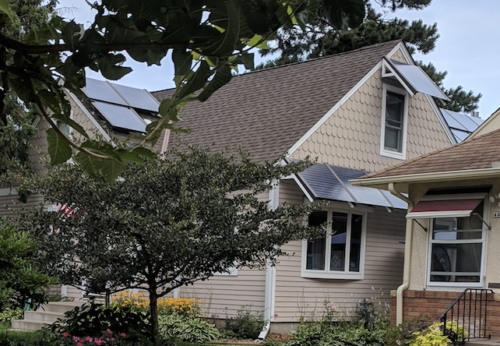 This increases their square footage for solar production while also providing passive solar benefits by reducing the amount of high summer sun heating up their home (while allowing in heat from the lower winter sun). Awnings are underrated from an energy savings perspective.

So, who will be first on your block so we can turn it green?

Here’s a screenshot of the map above from August 5, 2018. I’m sure we’ll see quite a bit more green over time. 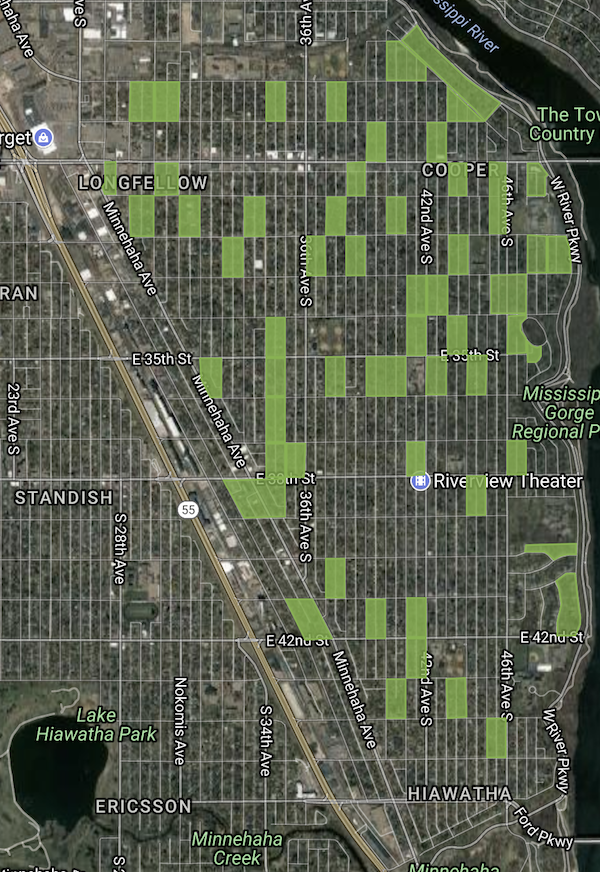