Here are some things I think I understand about the iron industry and its impact on Minnesota’s economy.

And, here is where this post is going: I’m all for providing government assistance to people going through tough times, but I really want to see viable long term outcomes.

So, below is my take on what I know based on what I’ve read about the challenges facing the Iron Range. It’s rather bleak. But, I do include an example near the end of one program that appears to be helping people find comparable wages in a growing and less dangerous industry. 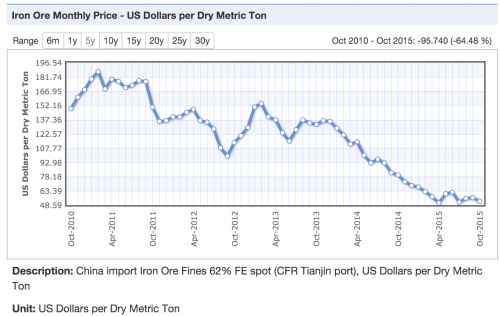 2. It looks like they’ll likely stay low for a long time.

Global iron ore demand will contract over the 2020s as steel consumption growth in China peaks, according to Citigroup Inc., which reduced its long-run price forecast for the raw material by 32 percent.

The long-run estimate was cut to $55 a metric ton from $81 as the world’s major mining companies added more cheap supply, analysts including Ivan Szpakowski wrote in a report on Wednesday. From 2016 to 2018, prices may average $40, it said.

3. Aaron Brown has reported on his blog that the cost of iron production in Minnesota’s mines is in the $40-50/ton range. If that’s the case, it’s tough justify running a mine if you can’t sell what you’ve mined profitably now or possibly for years in the future.

4. Large iron mines in other parts of the world are capable of mining iron at half the cost of Minnesota’s mines. Differences in the iron that’s mined, proximity to large manufacturing countries, and huge investments in automation (replacing workers) all play a role in the cost differences.

The cost of producing iron ore in Australia is substantially lower than the global average due to the abundance of high-grade hematite ores (iron content of 62.5% and above) and extensive infrastructure facilities. Hematite ores (also known as ‘direct shipping ores’) can be fed directly into iron-making blast furnaces and require relatively little beneficiation. As such, production from these deposits tends to place miners at the lower quartile of the cost curve. We believe mining giants such as Rio Tinto, BHP Billiton and Fortescue Metals will continue to enjoy the lowest cost of operations and remain the largest players in the global seaborne market. While the escalation in operating cost will be a major drag on miners’ profits over the coming years, the high quality ores and geographical location of Australia will keep a lid on cash costs and places the country as one of the best places for iron ore investment.

5. Each generation of mining brings technological improvements. For example, haul trucks have gotten bigger over time, which leads to fewer drivers. I found a history of haul truck sizes on a truck manufacturer’s website in Belarus (BELAZ) and used their milestones to chart out the changes: 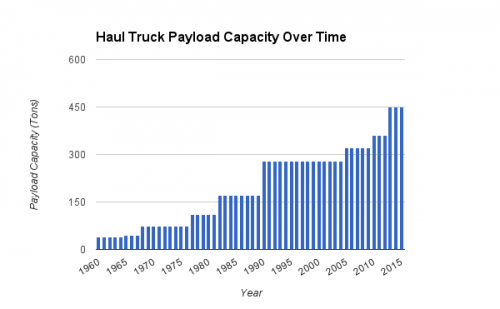 6. Trucks can now drive themselves. This is from Rio Tinto’s website:

AutoHaul®: AutoHaul® is the world’s first fully-autonomous heavy haul, long distance railway system, a key part of our Mine of the Future™ programme. We have invested US$518 million in autonomous trains for our Pilbara rail network.

9. There are accusations that Minnesota’s mining industry is being hurt by illegal dumping (charging lower prices on international markets than domestically for iron). Rep Melin made this accusation on Twitter:

I asked her if what’s happening is truly illegal:

I never heard back. I don’t know if the legal definition of dumping is really happening, but assumed someone from the Iron Range making that accusation might. Dayton has asked congressional legislators to look into this, but I haven’t found statements from anyone saying, definitively, that the reason prices are low in the USA is due to foreign countries selling iron at deflated prices to the USA.

It seems like market realities of the first eight points on this list would hurt Minnesota’s mining industry with or without illegal dumping. If we can’t produce iron below market rates, we can’t produce iron. That seems to be supported by the head of the IRRRB, who told the StarTribune last week:

Mark Phillips, commissioner of the Iron Range Resources and Rehabilitation Resources, said this is the worst downturn to hit Minnesota’s taconite industry since the 1980s.

“There is just a glut of iron ore in the world,” he said. “It’s the first time in my memory where the U.S. economy is relatively healthy and that the steel and iron industry is in this bad a shape. Usually, we ride with the economy. That is the sad point about this.”

Basically, it sucks, but it’s not due to overseas evildoers but worldwide changes to both supply (increasing) and demand (decreasing).

Senate Majority Leader Tom Bakk on Tuesday endorsed Dayton’s proposal, saying in a letter to the governor that he is “receptive to negotiating the parameters” to aid several hundred steelworkers who are expected to exhaust their unemployment benefits before lawmakers convene in March.

Dayton said in a news conference that “it’s a very severe situation up there,” and warned that without legislative action, several hundred steelworkers will “be subjected to that additional financial hardship, in addition to the emotional distress of not being employed.”

This is a very difficult situation. People were laid off. The reason they were laid off is due to world-wide depression in the price of the product they help product. The price of the product they produce doesn’t appear to be forecasted to rebound to anywhere near the levels needed to return the industry on the Iron Range to where it was for possibly half a decade if the analysts cited above are correct.

And, if prices actually do rebound, mines will likely return with a need for less workers per ton of iron mined than they needed in the past in order to compete with mines that are producing iron at half the cost due to higher quality mined iron and serious automation. There is simply no way that the people on unemployment will be returning to the jobs they’ve had in the past.

What can be done?

The inspiration for this post was an article I recently read about a similar situation for coal miners. “Canary in the Code Mine” is a story about a town in Kentucky that faced similar challenges to the Iron Range. In fact, their challenges may be worse for coal because iron likely has a better chance of rebounding at some point.

A guy in this community was insulted by comments by Michael Bloomberg, who funds programs to kill coal burning power plants (existing and planned). It wasn’t his opposition to coal burning power plants that really motivated the guy in Kentucky. It was a patronizing comment by Bloomberg where he said that coal miners couldn’t be retrained as coders. Long story short (it’s worth a read), the community launched coding classes to retrain miners in an industry with similar pay, but less risk of lung cancer or suffocation in a mine.

They paid people $15/hr to go through coding training. They vetted people to determine if people were logical thinkers and capable of sitting at a desk for 8 hours/day. They also trained them on how to communicate over chat with white collar nerds (their new peers). It turns out that blue collar nerds have some good ideas on programs to built that white collar nerds would never consider. Sure, an app for on-demand massages (yes, this exists) is likely a decent business, but there are some more practical things that could also be built if people with experience in blue collar industries had some coding experience to tie it all together.

This is a program that would be easily replicable anywhere. Their training was done by leveraging Lynda.com. Lynda.com, for those who aren’t familiar with it, is a great website for people interested in learning just about any piece of software or programming language. Here is what it costs: 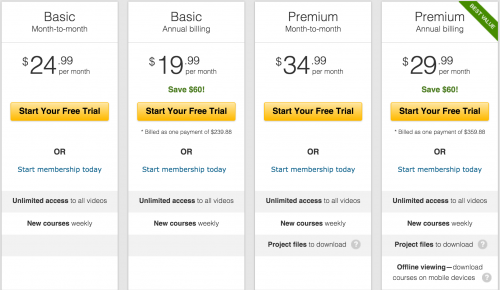 This article is around 89% pessimistic about the future of the Iron Range based on the economic realities of the iron mining industry and the idea that emergency extensions of unemployment benefits can solve long term problems.

I’m also trying to be optimistic since there are real ways to create new skills for motivated people interested in changing industries and covering their mortgage while potentially working from home or at new startups that pop up to solve problems using the newly developed skills.

Coding as a new opportunity undersells the transferrable skills from mining jobs to IT. Project management is a universal skill. The article linked above mentions that errors in mining can blow up the wrong side of a mountain while errors in programming are more of a fail fast and fix situation. While that’s true in some cases, there are many industries where attention to detail is absolutely critical to a project’s success. People in project management roles don’t need to know how to code, but they need to understand what’s possible in what time frames (by asking questions). Instead, they need to know how to scope out a project, manage people, ask good questions, communicate well, and try to hit deadlines.

For some Rangers, the leaving the Iron Range is going to be a more rational choice. That was the same choice made by the people who moved to the Range 100 years ago. Perhaps some laid-off workers will see the writing on the wall and see the future for their families in growing communities elsewhere? They wouldn’t be the first to make that choice. And, based on what I’ve seen with Rangers in the Twin Cities, they never fully leave The Range behind since everyone in Minnesota is within two degrees of separation of a Ranger.