The Liberty Tea Party Patriots hosted a talk about energy at their monthly meeting last night. Energy is an important topic that’s certainly worthy of discussion by any group. Here’s how this group promoted their event:

I’m not sure why renewables in is quotes. I suppose is someone doubted that the sun would keep shining or the wind blowing in Minnesota, that would make sense. However, there may be larger issues to discuss than our energy mix if that’s what our future looks like.

This event was hosted in Champlin, so close to the largest producer of both energy and pollution in the State of Minnesota. Xcel’s Sherco power plant. Xcel announced last month that they’re going to transition two of the three coal burning generators at the plant (the older, dirtier, of the three) to a new cleaner-burning natural gas powered generator. And add a large solar array. And, make up for some of the other energy differences with additional wind and solar.

I found the premise and setup of this event fascinating. When I hear the term “Freedom” followed by opposition to locally produced energy, I get confused. When I went through the process of researching solar panels for my home, I watched a lot of YouTube videos on DIY installations. One thing most of those videos had in common is they were done by right-wing Tea Party type individuals who consider themselves Preppers. The Survivalism crowd is full of people who prepare for doomsday scenarios. Prepper tactics include storing food, having a fall-out shelter, an arsenal, or off the grid power generation. To me, these vary in rationality, but something like solar panels can benefit a person whether or not a doomsday ever arrives, so there’s less downside than, say, having a ton of guns around the house.

Frankly, as long as a huge percentage of the state’s energy comes from a single location, we’re more susceptible to doomsday energy issues than if energy is generated in a highly distributed format (and closer to it’s end use). As a bonus, less energy is wasted in transmission. So you’d think freedom loving prepper types would be all over solar in general. However, that’s not necessarily the case. I get the impression the best ideas can suddenly become the worst if the perception is that there were Obama’s idea.

So, I thought it might be interesting to toss a few freedom-centric energy questions into the mix with the Liberty Tea Party Patriot crowd. I did this by posting to their Facebook event’s page last night (typos are all mine): 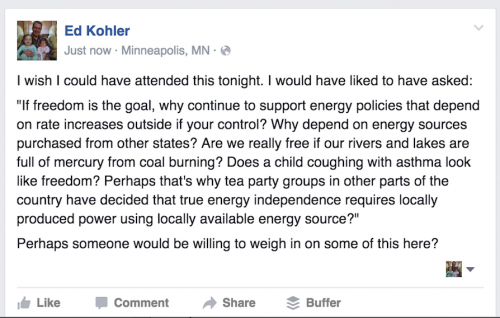 Since that was a public post, it started to pick up some views and likes from people I know and don’t know. I didn’t receive an immediate response from any members of the Liberty Tea Party Patriots group.

Then something odd happened. 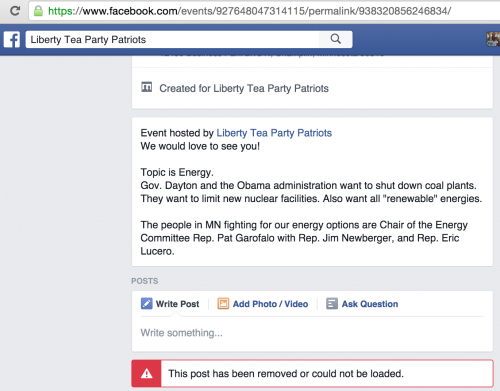 Too hot to handle? It’s not like I brought up global warming. I tried to focus on the aspects of locally produced distributed energy generation that would appeal to people who claim to value freedom. The kind of stuff that right-wing Tea Party folks in Georgia used to lobby for more solar energy purchasing by their local utility.

In this case, I get the impression that any idea coming out of the Obama administration is automatically bad. And, that people living near the Sherco plant want government to protect the pollution importing, centralized power producing status quo since there are jobs in those communities tied to the that plant.

It’s a shame that people in that community don’t seem to be able to see a future where there are more energy industry related jobs installing and maintaining locally produced – distributed – micro power plants on houses, offices, and farms, but that’s where things are heading. And, as we go there. As we create a distributed power grid that’s less susceptible to catastrophic outages at huge power plants, with power produced within the communities it’s used (even on the same property in some cases) there will be no going back. We won’t one day say, “You know what, get Wyoming on the phone. Let’s go back to burning trainloads full of coal in Minnesota.” It’s the kind of thing that we already know is ridiculous, and will look only more ridiculous in hindsight.