St Paul gets its share of criticism for being a tough to navigate town for outsiders due to the lack of pattern is their street naming and non grid conforming downtown. But, Minneapolis has its share of issues for outsiders too. Here are a seven examples:

1. The streets most likely to be encountered by outsiders don’t follow cardinal directions. A lot of visitors to Minneapolis come from places where terms like North, South, East, and West still mean something. If you’ve flown over the state, you’ll know that it’s largely a checkerboard with North-South and East-West roads drawing the lines. But, all of that changes when you get downtown. Take a frustrated pro sports fan (non-Lynx, obvs) at the end of another disappointing loss, and tell them you parked to the North. It turns out that can become more frustrated. 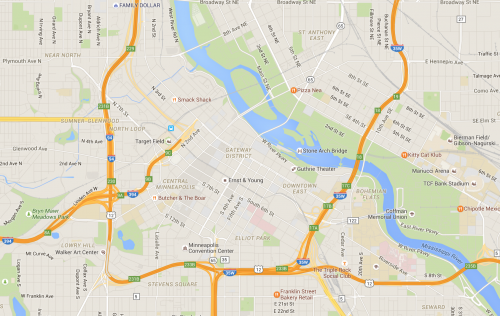 2. Minneapolis bends major streets. Hennepin Ave is a common street an outsider may encounter in downtown or Uptown. But, they’ll most likely encounter a stretch that doesn’t follow cardinal directions and/or the grid. 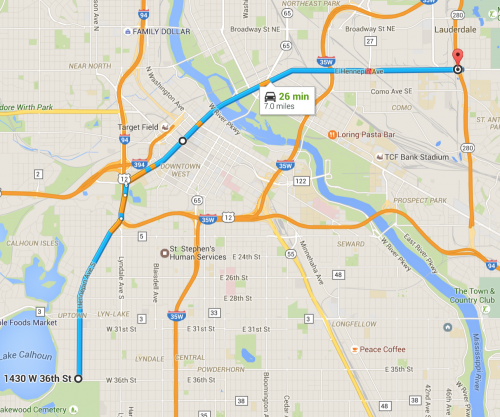 3. Minneapolis numbers streets, except those that count. Imagine you’re in Uptown at Lake Street and Hennepin and hear that there’s a Greek Fest worth checking out nearby. Someone tells you it’s at 35th St, so all you need to do is figure out whether to go North or South to get to 35th Street from Lake Street. But, we don’t call Lake St “30th Street”, or include any indications on signs that it’s 30th for navigational purposes. 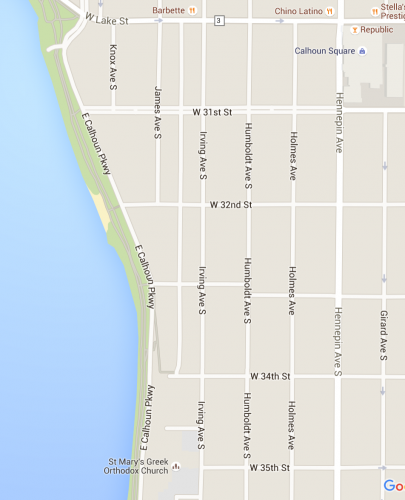 4. Numbering streets in both directions. Numbering streets is a great way to improve navigation, but it can go too far. For example, the East side of South Minneapolis numbers both the streets and the avenues (But, not Lake, Franklin, Minnehaha, Park, or Portland [See #2]). This forces outsiders to quickly get up to speed on which direction is for avenues vs streets. This can be a challenge for people driving on deadline to the Riverview Theater, who’ll end up near .7 miles away from their real-butter popcorn if they get it wrong: 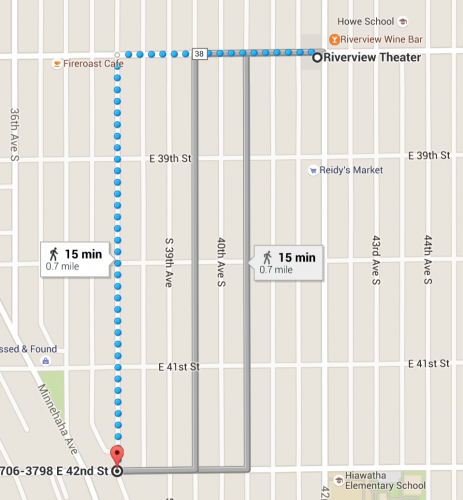 5. Non-Euclidian Geometry. If we were paying attention in planar geometry, we learned that parallel lines don’t cross. But, don’t tell that to the street namers in Northeast Minneapolis where Avenues intersect with Avenues and Streets with Streets. For example, if it dawned on you that you’re far better off going to Anchor Fish & Chips than having a Filet-O-Fish, the two main routes take you on University Avenue to 13th Avenue or Broadway Street to 3rd Street. 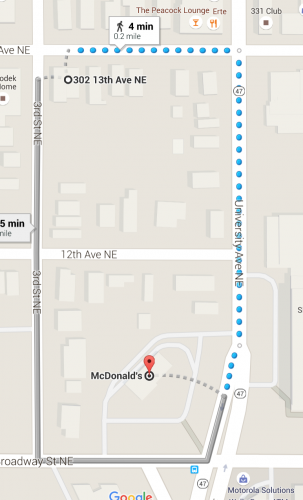 6. We bend interstates. If you want to mess with people’s navigational skills, bend the roads they take to enter your town. If they’re not sure whether they’re going West or North when exiting I-94, or North or Southeast when exiting I-35W, they’re directionally impaired even before they hit the local streets. The best solution to this problem is to do what great cities have already done: get rid of the highways in the city. 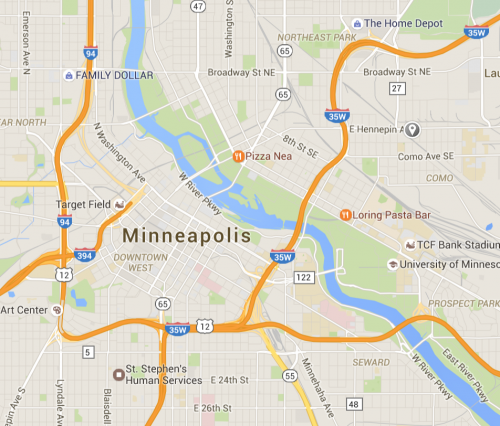 7. (Retired). We let a publicly financed stadium be named after the private Mall of America – with the revenue going to a private company – in a location that’s nowhere near the Mall of America. I’ve helped people leaving downtown on the LRT understand that the MOA is quite a bit further down the tracks than the Wilf Family’s brand selling schemes would have you believe. I believe confusion caused by this map, which is supposed to help out-of-towners, was the culprit:

The Downtown Improvement District did a good job tricking outsiders into not making it to Bloomington with that map.