Earlier this week, a guy from South Dakota escaped from prison, stole a car from a Pizza Hut delivery driver in Sioux Falls, pulled a gas & go in Lakeville, and robbed some banks in Minneapolis.

On the 13th, I made this comment via email to a friend about his crime pattern:

This morning, this happened:

A South Dakota prison escapee was caught early Wednesday at Mystic Lake Casino after piling up a slew of crimes since late Friday that included three bank jobs in the Twin Cities, an auto theft and other offenses, authorities said.

Why Mystic Lake? I don’t know about you, but when I land some cold cash of questionable origin, the first thing I want to do is launder it. And, what’s more convenient than anonymously bumping the questionable cash into slot machines, playing a few hands, then cashing out some fresh bills? You may even win something. Or, if not, you could count that as a laundering expense when you file taxes on your bank robbery earnings. (Disclosure: I’m not a CPA.)

We’ve heard this story before. Another high-profile example of this made the news last September: 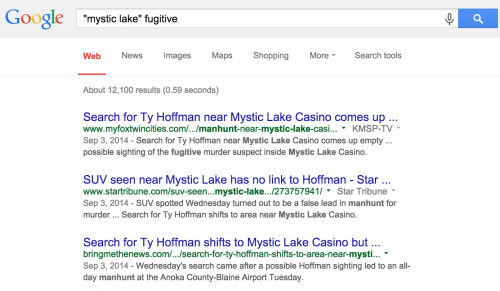 Thus the need for a downtown casino. Fugitives shouldn’t have to drive all the way to Shakopee to launder money1.. This causes wear and tear on our roads2., adds to congestion, air pollution, and ramps up the costs caused by multiple law enforcement departments getting pulled into investigations.

I don’t know if fugitives are better or worse drivers than average. Perhaps they’re extra attentive and law-abiding? Or, maybe they’re a bit distracted by the sudden lifestyle change? I just hope that they don’t draw attention to themselves by driving slow in the left lane.

Granted, fugitives aren’t your typical 9-5ers, so congestion alleviation may not be the biggest issue here. But, the downside of working odd hours is poor public transit options. It’s also a reverse commute (or the dreaded suburb to suburb commute), which are both difficult transit options. Uber’s obviously out of the question when you want your privacy respected.

Now, not every money launderer is a bank thief or murderer. Some are smaller time thieves who’d like to launder their money but don’t really want to make the drive all the way to Shakopee. Sure, they don’t get the same level of attention, but attention isn’t really what they’re seeking. Think about the benefits for these entrepreneurs. Less windshield time = more productivity.

Maximizing the full potential of our existing infrastructure is just good public policy.

1. Pro tip: Rob coins. Sure, they’re heavy, but are they marked? And, if you’re concerned about them being marked, Coinstar locations are a lot more convenient than casinos.