I was hoping that MN United would somehow be different than every other professional sports franchise in our local market, but then I read stuff like this: 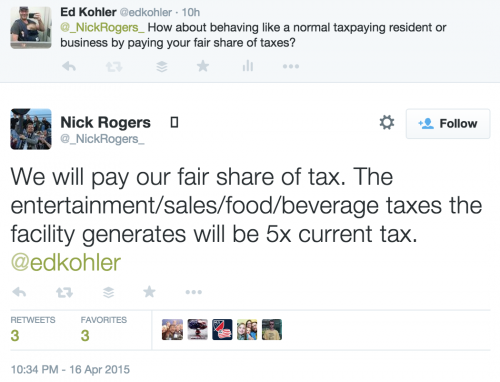 If you’re a business or resident in Minneapolis and you buy a property and improve it, you’re expected to pay property taxes. That’s the deal. It’s really quite simple. But, MN United seems to think that they deserve to redefine “fairness” based on sales tax generation.

It’s as if pro sports are the only industry that competes for entertainment dollars and generates sales taxes. Why should they be subsidized while local restaurants aren’t? If we were going to subsidize an entertainment business, how about subsidizing ones that are open more than 17 days per year?

But, the bigger issue with MN United’s claims is the math. It’s the kind of math only people who mistakenly trust pro sports franchise owners can believe.

Here’s the problem with their sales tax math. It assumes that every single dollar of sales taxes generates at the soccer stadium would not have been generated anywhere else in the entire state of Minnesota if there wasn’t a publicly subsidized pro sports stadium.

It’s an utterly preposterous assumption. Put another way, they’re lying. And, people who mistakenly trust MN United’s statements are falling for it: 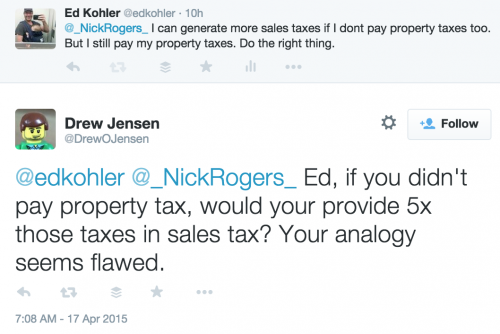 People blindly trust pro sports owners that are in the business of subsidizing their businesses rather than competing fairly for entertainment dollars in the private market.

But, what makes this situation particularly interesting is that even loyal MN United fans seem to be embarrassed by the requests to shift property tax burdens onto homeowners and local business in order to further enrich some of MN’s richest residents. This is my assumption based on the lack of response to questions like this: 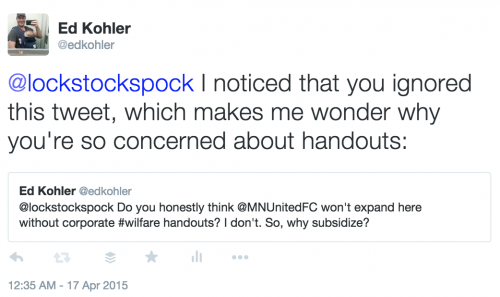 Let’s try being honest. MN United doesn’t need subsidies. The team will be here. A stadium will be built. And Minneapolis will benefit from hosting a new local business while expanding its property tax base. That’s what fairness looks like.