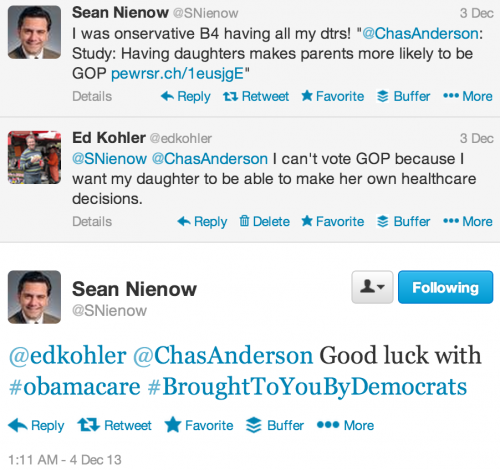 When I use the term “health care” I use it to refer to what doctors do for patients.

But, when Sen. Nienow used the term, he used it to describe access to health insurance for those who don’t have access through their parents, their places of employment, medicare, VA, or private insurance plans.

These are obviously two different takes on the same term.

Personally, I’d like to see everyone have access to my definition of health care, and don’t particularly care what mix of private/public models achieves it. That said, I would like it to be done well, which is why people demanded change from the health care access model that wasn’t working for far too many Americans.

Health care, to date, has not been universal and has been economically crippling for many. America’s system of denying access to health care based on preexisting conditions was clearly a broken system. We can treat our sickest better than that.

A health care system that relies upon friends and family fundraisers for people who get into car accidents or contract cancer is one messed up system. Yet, we see posts on Facebook or signs in restaurants for upcoming fundraisers to do just that. I attended one recently for a restaurant employee who contracted brain cancer. The fundraiser did extraordinarily well due to his connection to an amazing group of friends with the means to help. But, the money raised will still only make a small dent in the bills he’s likely facing. Had he been insured under the new Obamacare model, the fundraiser would have likely covered the

Obamacare, as I understand it, is designed to increase the percentage of Americans who are covered by health insurance, and the quality of their plans. In practice, this will increase the number of people with access to health care. Why not just do the latter by directly providing health care to more people? Because, as I understand this issue, it was politically impossible to do so based on resistance from health insurance lobbyists than their GOP allies.

So we’re in the middle of an incremental improvement designed to increase the quantity or insured and the quality of their plans (just like how car insurance plans have minimum standards).

While there have been plenty of glitches with the rollout (especially in states resistant to the idea of increasing the state’s insured rates) I have a hunch that the glitches will be worked out, more Americans will be insured, and their average plan will be better than it was in the past. Then, when the GOP tries to roll things back, people will be reminded of where we were: I don’t think we’ll be going back there.

Rebecca Hoover has been documenting how frustrating the MNSure enrollment process has been on Twitter, and reaching out to politicians to try to light a fire under them to try to fix it. 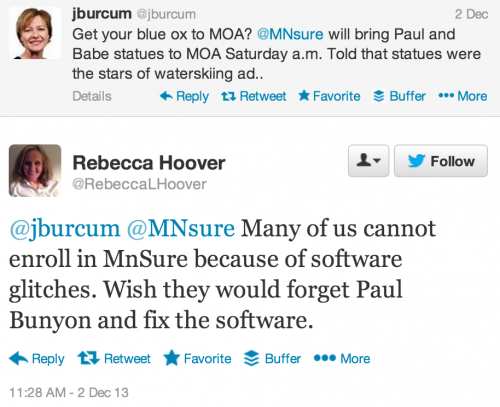 She’s frustratingly gone through the enrollment process (that process is improving), and seems to be equally as frustrated with those who are opposed to increasing access to health insurance as she is with the MNSure system: 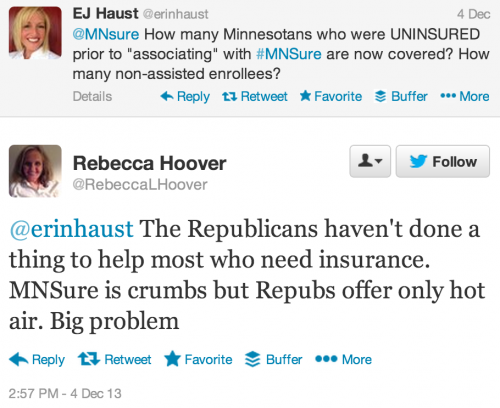 Here’s one question posed by Rebecca Hoover to Sen. Nienow that I’ll take a stab at answering (he retweeted it but didn’t answer her question. Is he just stoking fear? Didn’t want to go on record by saying “Nothing.”?): 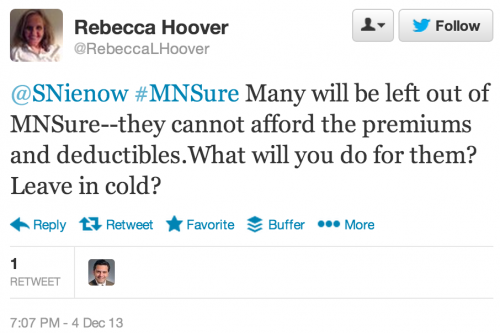 MNSure plans are subsidized based on income to the degree that Democrats have been able to achieve against resistance from the GOP.

But, the bigger win here, as I see it, is on the deductible side. In the future, when I see announcements for health care related fundraisers posted to Facebook – or the entryways of restaurants – to help friends and families pay medical bills, the financial goal will be to pay a known deductible. Even a high deductible is an achievable goal compared paying the medical costs for the uninsured who find themselves facing huge medical bills at the time when they are least able to pay them. That, to me, is slightly more civilized access to health care than we’ve had before.