A MN GOP group called something like the MN Corporate Welfare Coalition* is going after Governor Dayton on the day of the groundbreaking on the new Vikings stadium with a blog post titled: “Mark Dayton Fumbles on the Vikings Stadium Deal“. 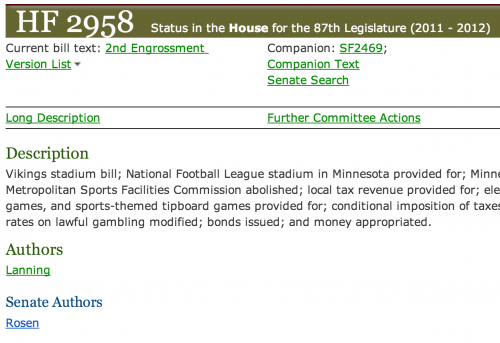 Can you believe that MN GOP Rep. John Kriesel’s gambling exploitation through e-pulltabs bill was used as the funding source? I testified at the Commerce Committee hearing about the pending e-pulltabs disaster, but the MN GOP majority committee passed along the highly questionable MN GOP authored financing scheme. 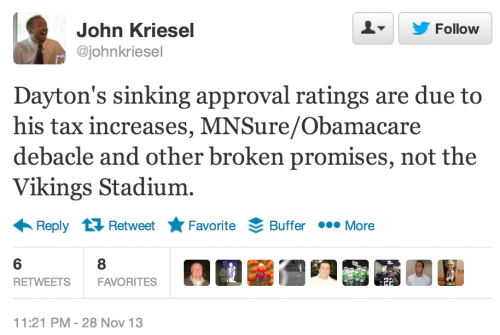 Sen. Nienow broke this down for Kriesel: 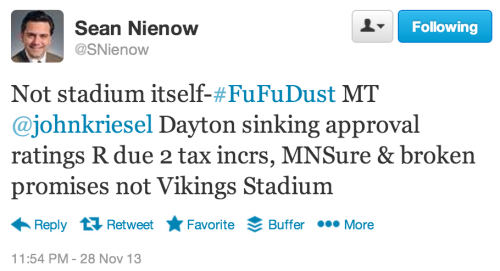 As Nienow explained to Kriesel, it never was about whether folks wanted a new stadium. It was about who should pay for it, and how, and – should the public would put money in – is the funding source reliable?

Again, it’s not a joke to commit the state to paying tens of millions in corporate welfare in order to subsidize your own entertainment. Especially when something as sketchy as e-pulltabs is used to do it: 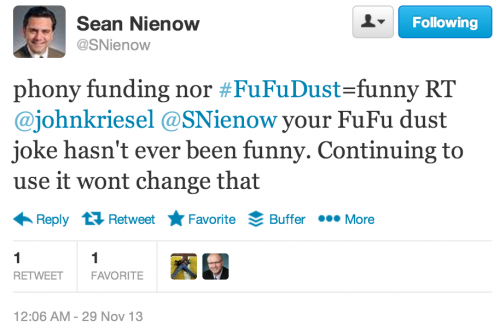 The shine has come off the corporate Wilfare through gambling exploitation scheme that Rep Kriesel sold to the state: 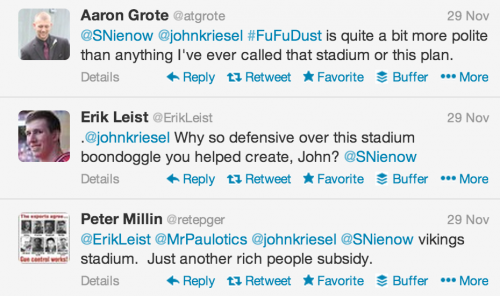 Notice that this is a case of MN GOP folks attacking the MN GOP author of a MN GOP financing scheme for a MN GOP authored corporate welfare bill.

I can see why they’d rather blame Dayton for the financing mess, but Dayton didn’t write the bills, hold the committee hearings, or have a vote in the MN GOP controlled house or senate.

I think Rep Kriesel’s closing arguments on why he supported subsidizing the NFL with e-pulltabs explains why this was a MN GOP disaster. The first thing he does is choose to ignore the financing and instead focuses on how important it is to him to publicly subsidize his private entertainment:

Note that this video is hosted on the MN GOP’s official YouTube channel. As in, they’re proudly touting the financial disaster they created.

* I think their mission is to create minimum wage jobs with no healthcare on behalf of publicly subsidized corporations who support MN GOP candidates.