Back on November 15th, Denver Nicks wrote a Time Magazine’s Swampland post about a Bloomberg News story. This Time site, Swampland, claims to provide “Political insight from the Beltway and beyond”.

Nicks’ post recapped what Bloomberg reported about Amtrak’s recent financial woes, with a look at their food & beverage services. Bloomberg’s reporting explained that Amtrak’s F&B service lost $72 million last year. They went on to explain that $428,000 of those $72 million in losses were due to offering free wine, cheese, and champagne offered on long-haul trips.

But, when Nicks rewrote Bloomberg’s reporting, he used the title:

But, surely, Denver Nicks clarified this in the post he wrote? Actually, no, he didn’t. He actually made it less clear:

The problem with sloppy reporting like this is that people tend to believe it. This includes fellow Time employees like Callie Schweitzer: 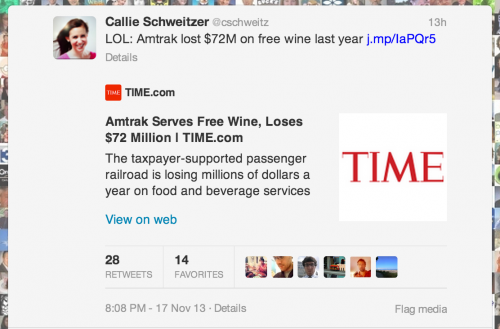 The LOL seems to suggest that she believe Denver Nicks’ reporting. Not that she thinks his reporting is laughably misleading, although that’s funny to consider.

@sumnums took a shot at explaining the problem with Nicks’ reporting to Schweitzer: 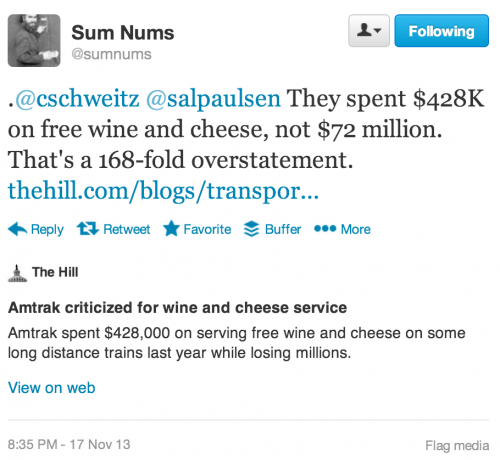 Also, notice how much more accurate The Hill’s story is with their title and lede than Denver Nicks’ story at Time.

I offered Schweitzer some help too: 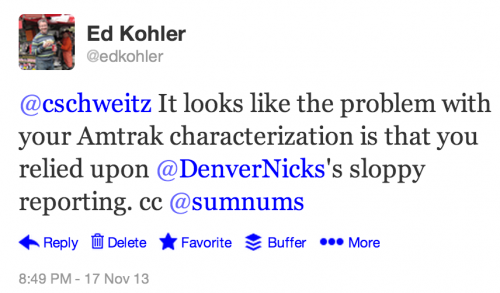 To me, it seems like Amtrak has enough financial problems to solve without having to deal with people like Denver Nicks making it sound like the train service gave away $72 million in food last year. Had Denver Nicks’ story lead with “Amtrak Gave Away an Average of $2.31 in Free Food & Drink to Passengers Last Year” he would have been a bit closer to accurate than what he reported. But, that doesn’t sound nearly as alarming.

Which brings me to this Tweet I received from Denver Nicks:

The thing is, that’s the problem. I am literate, and so is Callie Schweitzer. If either of us relied upon Denver Nicks’ reporting, our literacy would lead to us being misinformed about how Amtrak went about losing $72 million on food & beverage last year.

To me, this is a good reminder that we need to increase our media literacy by seeking out reliable sources for our news.

Nicks has a good point. A lot of writers don’t write the headlines of their articles/posts. But, they do write the bodies of the stories. And, as my above post explains, the problem here is that Denver Nicks story about Bloomberg’s story reported:

A Times Swampland headline writer, having read Denver Nicks’ story, could easily end up writing that misleading headline since they likely based it on Denver Nicks’ misleading reporting rather than what Bloomberg actually reported.

More importantly, as far as I’m concerned, is that Denver Nicks has not updated his misleading story. That “less than clear” / misleading story has been tweeted 122 times and liked on Facebook 132 times as of 8:50pm CST on 11/18/2013. If Denver Nicks is not going to be first to a story (he was aggregating content from Bloomberg) or add any value (he subtracted value) what exactly did he accomplish with his piece?

7 thoughts on “I am Literate, @DenverNicks, and That’s the Problem”