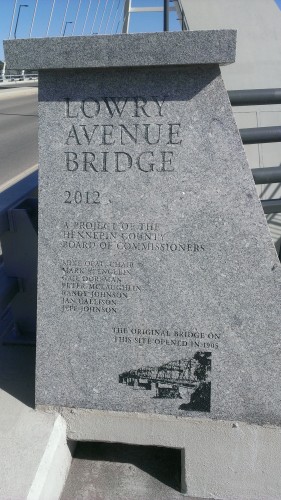 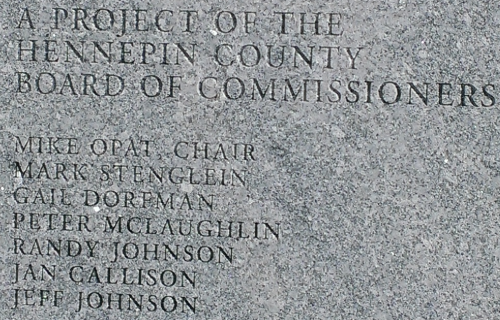 We don’t see a lot of stuff like this in Minnesota compared to Illinois or New Jersey, but I’d rather see none. Why are we spending the public’s money memorializing politicians who had the courage to spend the public’s money replacing a closed bridge with a new bridge?

In this case, the self-congratulatory sign overlooks how the new bridge was funded (according to Hennepin County’s website about the bridge:

The County Board approved the Lowry Avenue Bridge replacement project as its No. 1 state bonding request in summer 2006. Funding sources for the project include Hennepin County bonds; state bridge bonds; a $475,000 federal appropriation granted in March; and $10 million in federal stimulus funding.

It sounds to me like we all helped pay for the bridge through a combination of the county, state, and federal taxes.

The sign on the bridge mentions who authorized the bridge, but overlooked the project’s incredible scope and budget creep:

Though a budget was never set, original designs for a 900-foot river crossing were projected to cost around $36 million. The budget later grew to $104 million after county officials decided to add a land bridge on the west end, extending the overpass so the shoreline wouldn’t be interrupted.

I suppose it’s hard to miss a budget for spending the public’s money if you don’t bother setting one.

One related issue that doesn’t bother me is when a sign is posted during a construction project explaining how it’s being funded. For example, there’s a sign on East River Road around 1/4 mile north of the Lake Street Bridge explaining that some work being done there is funded by the Clean Water Land and Legacy Amendment fund.

“Here’s where the money for this came from” is a far more interesting disclosure than a memorial to the spenders.