I was out for a morning walk with my daughter on September 7th along East Lake Street near the SuperAmerica when I witnessed a common encounter between a car and a cyclist. The driver was driving eastbound on Lake and attempting to make a left turn into SuperAmerica while a cyclist was heading west on Lake. The driver nearly hit the cyclist. Both the driver and cyclist hit their brakes at the last minute to avoid a collision. After that, the cyclist gave the driver a piece of her mind.

This made me wonder how the driver didn’t manage to see the cyclist earlier. It’s not like there was a lot of traffic on the road (my daughter’s had a knack for waking up a bit before I would have otherwise chosen to on a Saturday morning so it was really quiet on Lake). So, I strolled out to the middle of East Lake and took a look to the east. This was the view at 7:27am: 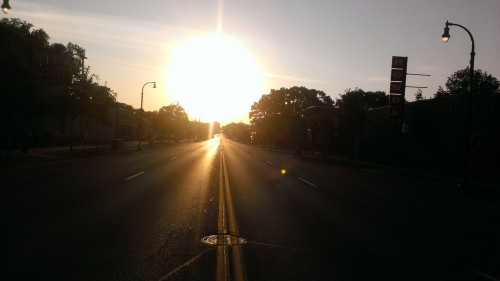 Obviously, the driver is responsible for maintaining control of their car and should be aware of pedestrians, balls bouncing out into the street, cyclists, and emergency landing airplanes. But, I can see how a driver driving down an empty street directly into the sun might miss a cyclist coming the other way. In the end, it’s better to be alive than right.

Which is why I, when commuting east/west along Lake Street, generally do not use Lake Street. Here’s a tip: both 31st Street to the south and 29th Street to the north have even less traffic than Lake Street AND a canopy of trees that improve visibility for drivers. While shifting a block north or south may add as much as two flat blocks to your commute, you may reduce your risk of being hit by someone who can’t see you, and you may find the ride itself more enjoyable. Given a choice, I’d recommend 31st St since it has brand new pavement. Try it. You’ll like it.

One thought on “Cyclist Visibility at Sunrise”