Larry Jacobs through out a question on Twitter yesterday that drew some responses that I found interesting: 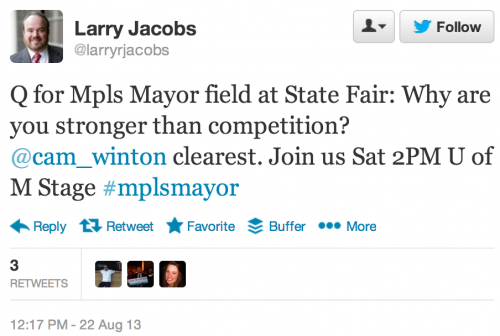 First, a member of the Andrew campaign decided to be divisive with this response: 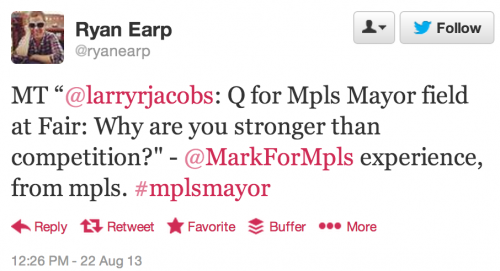 At least, that’s how I take statement.

Is Mark Andrew’s campaign honestly saying that candidates who weren’t born in Minneapolis aren’t qualified to be mayor?

Is it because Betsy Hodges has ONLY lived in Minneapolis for 15 years, worked for Hennepin County, and been a very effective city council member?

Is Don Samuels less qualified to be mayor than Mark Andrew because he was born in Jamaica? He’s ONLY been on the Minneapolis city council for the past 10 years. Can we trust a guy like that?

Is Cam Winton less qualified to be mayor that Mark Andrew because he’s ONLY lived in Minneapolis for seven years? Can a guy honored as a 40 Under 40 by the Minneapolis-St. Paul Business Journal really be considered one of us?

Is Stephanie Woodruff less qualified to be mayor since she’s ONLY moved to Minneapolis after graduating from Drake University in 1987?

I decided to find out, so I replied to the Andrew campaign staff member who raised the issue: 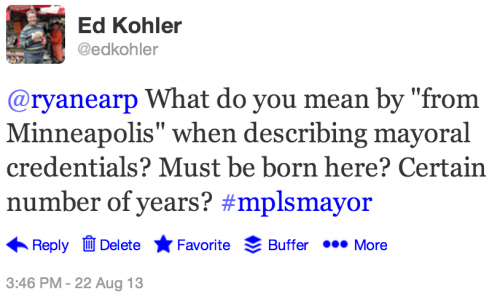 As someone who’s lived in Minneapolis since 2004 and really likes this city, I have a hard time with crap like this from the Mark Andrew campaign. Minneapolis is my home. Yes, there are people who’ve lived here longer than me who can say that I’m not from here, but that doesn’t necessarily make them more qualified to be mayor than people who’ve lived here for shorter periods. For example, mayoral candidate and lifelong resident of Minneapolis, Jackie Cherryhomes, thought Block E was a good idea when she was on the city council.

The Andrew campaign does seem to have a bit of a coalition of the “you weren’t born here” crowd. Mayoral dropout, Jim Thomas, mentioned his Minneapolis roots as a differentiator with Don Samuels during a debate earlier this year:

After Don Samuels mentioned in his opening remarks that he had arrived in the United States with $83 in his pocket, Thomas was ready with a response.

“I was born in Minneapolis at Swedish Hospital, and I can beat Don,” said Thomas, kicking off his opening statement. “I had no money in my pocket when I arrived in Minneapolis,” he said, drawing a laugh from the standing-room-only crowd at Solomon’s Porch in south Minneapolis.

Back at that same debate, when asked about ranked choice voting, here was Andrew’s response:

“It will increase participation,” said Andrew. “It will take the fangs out of some of the political discourse.”

If that’s how Andrew feels, perhaps he can get his staff to drop the “they weren’t born here” rhetoric and focus on what makes Andrew a candidate to consider for a 1, 2, or 3 choice on this fall’s ballot?

Larry Jacobs gave both Ryan Earp and Mark Andrew an opportunity to make their case on Twitter: 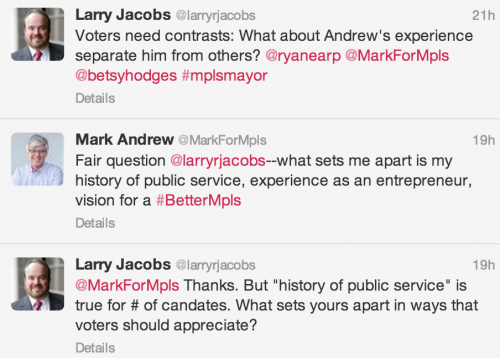 Given that opportunity, what did Earp and Andrew do? Nothing.

If the Andrew campaign continues with this divisive rhetoric, will they alienate voters who’ve moved to Minneapolis and consider the city to be their home? Why would they vote for the “you’re not from here” candidate when they can rank candidates on their ballot who’ve moved to the city, made it their home, and are willing to work together to make the city a great place for those who’ve lived here forever and our more recent residents?

13 thoughts on “Does Mark Andrew Think His Opponents Aren’t Minneapolis Enough to be Mayor? #mplsmayor”