I had a chance to attend the latest Minnehaha Ave reconstruction public hearing last night to hear more about how the plans are coming together . . . or not.

There is a lot of interest in transforming Minnehaha Ave into a more multi-modal street where cyclists and pedestrians would have more than a thin line of paint protecting them from motorists.

My daughter’s daycare is on Minnehaha Ave, and I’m a fan of Peace Coffee, so I spend quite a few days per week on the street. One challenge – especially during rush hours – is that the street is used as an artery by people spilling over from Hiawatha. Traffic gets backed up with frustrated drivers who’ll whip around other cars if they give the slightest hint that they plan to turn left or right off Minnehaha.

This can make crossing the street challenging at times. And, makes cycling within the painted bike lanes pretty darn scary. The current design tees people up to get hit by frustrated drivers who get so focused on car traffic that they forget that people are using that thoroughfare in other ways as well.

A lot of writing has been done regarding the best options for reconstructing the street, such as adding bump-outs at intersections to decreasing the walking distance for pedestrians (this is something I really appreciated on Lake Street when I had a ruptured disc in my back two years ago) and creating physically separated cycling lanes such as cycle tracks. You can find examples at My Broadsheet, Minneapolis Bike Coalition, Joe Urbanist, and Streets.mn.

Since Minnehaha Ave is a county road, another thing to consider is whether there are enough votes on the county board to support some of the more progressive design ideas. Commissioner McLaughlin alluded to this when he spoke early in the meeting when he said that nothing gets done in Hennepin County without four votes.

So, where would those four votes come from? Here’s a map of Hennepin County districts: 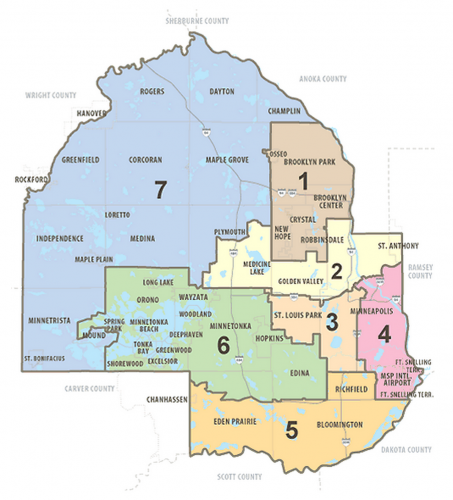 It sounds like the commissioners from three most dense population areas of Hennepin County are probably on board with transforming Minnehaha Ave into a route that’s safe for the more diverse transportation choices used by people living in and passing through the Longfellow Community.

I seems like Jeff Johnson is probably at the other extreme since he’s running for governor from Bachmann country. Getting someone from such a car-dependent part of the county to comprehend that people in South Minneapolis don’t want or need to hop in their car for every trip to the store, school, or park is about a long a shot as their is. However, it’s tough to use less car-dependent transportation options when roads are optimized for cars (both the driving lanes and parking designs) at the expense of more efficient transportation modes.

The challenge here appears to be that Hennepin County is split between some of the densest cities/neighborhoods in the state and suburban/exurban cities. Dave Troy recently looked at the impact this has on politics by analyzing the voting patterns in the past presidential election by population density: It turns out that populations skew left as they become more dense.

So, how does one convince commissioners living in the suburbs that the area along Minnehaha Ave in South Minneapolis has different needs than what their own communities face? It seems like every community in Hennepin County is strongest if each is allowed to play to its strengths.

In South Minneapolis along Minnehaha Ave, that would include providing safe routes for people making short commutes to nearby businesses, schools, daycares, and parks without relying upon cars due to the area’s density.