Or a Nikau-ometer from New Zealand:

But, when Xcel Energy created a graphic to represent the energy purchased through their Windsource program to date, they chose this graphic: 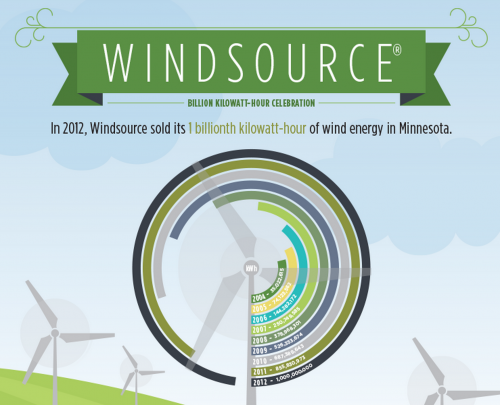 While typical, honest, graphics show progress toward a goal in a linear fashion, Xcel took a different approach. Things start out fine with their 2004 stats. But, when they added 2005 stats, they included the 2004 data with the 2005 data (the yellow line). 2006’s data includes the two previous years (turquoise line). By 2012, they were taking credit for every previous year within that one year.

Taking credit for 2004’s consumption in 2005 – 2012 is rather ridiculous. If they want to stack each year of data, they shouldn’t do so redundantly. Here’s a stacked version where each year is only counted once. 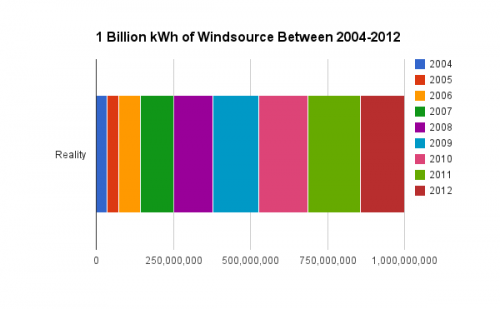 The early years on the left had lower consumption on the left, but in aggregate they reached the 1 billion kWh milestone. 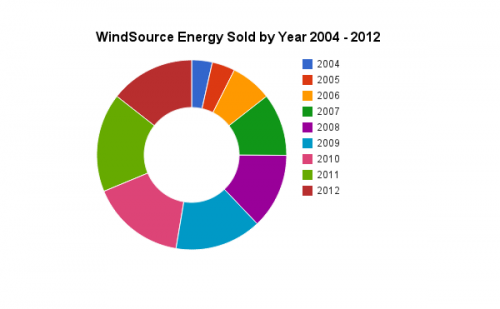 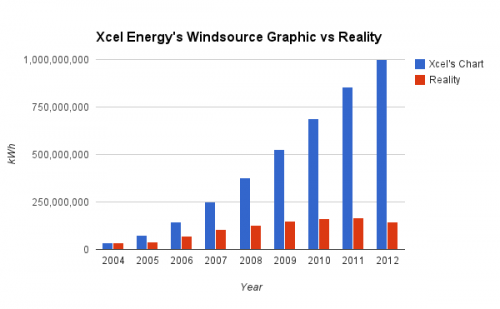 Why would they do that? Could a company with so many engineers not understand how to properly visualize data? Here’s one possibility. If I remove Xcel’s distorted data from the above chart we can see the trend in the popularity of the Windsource program: 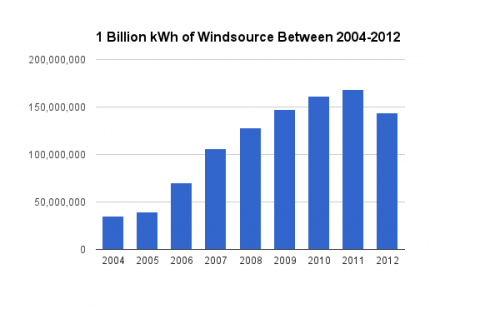 Is Windsource slipping in popularity? I don’t know. I’m assuming that the 2012 data includes the full year of 2012 since Xcel waited until April 2013 to put out a press release about the milestone.

But, the more important issue to me is Xcel’s knack for misleading customers about their practices. Their Windsource chart is one example of this. In this case, the volume of lines illustrating Windsource consumption between 2004 – 2012 in the Xcel’s chart create the impression that they sold 4X the volume of kWh they actually sold. The line for 2012 distorts their 2012 Windsource sales by nearly 7X.

I’m an Xcel customer and a Windsource customer. As a Minneapolis resident, I don’t have many energy options. But, even without options, I shouldn’t have to deal with a utility that so blatantly misleads the public about their renewable milestones.