The Center for Neighborhood Technology has an interesting map where they compare the affordability of neighborhoods and cities based on percentage of income. Here’s a look at the greater Twin Cities metro:

To me, this helps illustrate the challenge with driving until you can afford more home. In real estate, the term “drive until you qualify” is used. As in, you decide that you want to have 2,000+ sq ft, 4 bed and 3 bath while spending less than $170,000.

Currently, one house in Minneapolis meets that criteria (if you count the finished basement). But there are dozens in the greater Metro if you include Farmington, Cannon Falls, Zumbrota, MN or Roberts, Wisconsin: 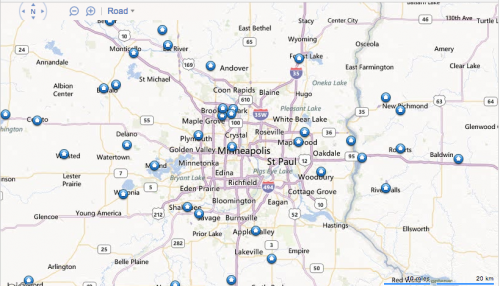 But, if work if found in the urban core, driving in from the extreme exurbs comes at a cost, as the right pane in the CNT map illustrates. It turns out that people living further out are spending a larger percentage of their income on housing + transportation than people who drive hundreds fewer miles per month.

Which makes me wonder: Who complains the most about gas prices? I have a hunch that it’s not people living in the urban core since the percentage of their income spent on gas is far lower than those who live further out. They may even drive more fuel efficient cars, making their fuel costs even lower. Anecdotally, I can say that gas prices are not a big topic of conversation among friends of mine who live near their jobs.

I wonder if there’s a feedback loop at play here, where people living further out end up justifying spending even more on vehicles since they know they’ll be spending an 1/8th of their waking hours or more in their cars? Which leads to higher insurance rates, which leads to more financial frustration they can ponder while listening to talk radio hosts explain to them that it’s all Obama’s fault (or, is it still Clinton’s fault?).

High gas prices seem to be a popular topic on talk radio during commute times when people with long commutes are tuning in to hear people complaining about a cost that’s built in to their budget due to their commuting distances. So longer commutes increase costs, increase wasted time, and increase the time spent listening to talk show hosts complain about the increases costs and wasted time. Is that healthy?

2 thoughts on “Who Complains the Most About the Price of Gas in the Twin Cities?”