Tim Nelson at MPR’s Stadium Watch blog has published a breakdown of the projected construction worker hours for the Vikings stadium construction project. It turns out that it takes a lot of hours to build a billion dollar stadium with bathrooms in every suite and a VIP parking ramp so corporate types don’t have to go elbow to elbow with the face painters.

The Minnesota Sports Facilities Commissions numbers claim that the stadium will take 4,525,935 worker hours, during which 23,331 workers will be on site for an average of 194 hours each. It will take around three years to build the stadium, so that comes out to the equivalent of 725 full time jobs for three years at a cost of around a million dollars per job between state and city subsidies once interest on the borrowed money is factored in.

The state’s share, as we know all too well, is supposed to be funded by exploiting gamblers with e-pulltabs devices. Let’s suspend reality for a second and assume that electronic e-pulltabs are as popular as the Harlem Shake was for around a week last month, and would be for the next few decades. If we do that, we can calculate how many gamblers would need to be exploited over thirty years to employ 725 full time equivalent construction workers for three years. Here’s how I see this: 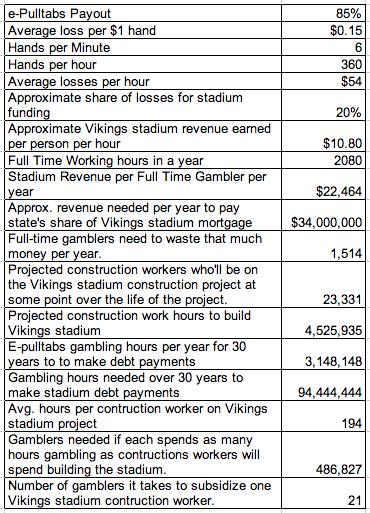 Here’s how this breaks down: E-pulltabs have an 85% payout, which means that people lose an average of 15 cents on every $1 bet. Around 20% of that 15 cents in losses (three cents for every dollar bet on average) goes toward the state’s share of the Vikings stadium debt. If the average e-pulltabs gambling rate is one hand every 10 seconds, they’ll lose an average of $54/hour. Approximately $10.80/hour would end up going toward the stadium.

How many hours does it take to lose enough money at e-pulltabs to cover the state’s share of the Vikings stadium mortgage? A sinking Vikings ship load.

At $10.80/hour in e-pulltabs losses, Mark Dayton, Julie Rosen, and Morrie Lanning, and John Kriesel decided that it would be in the best interest of the State of Minnesota to dedicate the equivalent of 1,514 Minnesotans to tapping e-pulltabs screens 40 hours per week for the next 30 years. That’s 3,148,148 hours of Minnesotans’ time devoted to tapping e-pulltabs screens every year for the next 30 years to subsidize the state’s share of NFL subsidies.

Let’s talk about jobs. Labor likes to inflate jobs numbers by discussing how many people will spend time on the job site rather than talk in terms of full-time equivalent positions. Let’s use their style of math for a comparison.

When Governor Dayton talks about the jobs the Vikings stadium creates, he shouldn’t focus solely on construction workers. He should also consider the 21 gamblers he created to subsidize each of those construction jobs. For example, to cover the state’s share of employing 84 full-time equivalent electricians for three years, approximately 10.8 million hours hours will be wasted by Minnesotans tapping e-pulltabs screens, causing them to lose $586 million.

As Governor Dayton has stated to defend Vikings stadium Wilfare financing, there’s plenty of blame to go around. Still, it was Governor Dayton who pulled on a Vikings jersey and held rallies in favor of this disaster, and put his signature on the bill.