I noticed today that the former state rep who authored the horrible e-pulltabs financing scheme that was supposed to cover the state’s share of the Vikings stadium corporate Wilfare project through gambling exploitation, John Kriesel, has blocked me on Twitter.

I’m not sure which Tweet inspired Kriesel to do that (I don’t follow Kriesel on Twitter, so I only noticed by chance), but it could have been this:

“Lawmakers gathered around @johnkriesel & congratulated him for his hand in the bill – crafting its funding mechanism.” shrd.by/xXlye8

Those were exciting times back in May 2012. Vikings fans, including John Kriesel, figured out a way to subsidize Zygi Wilf without spending their own money (unlike Packers fans do when they buy worthless stock) and without a referendum (unlike Packers fans did in Brown County to raise money for renovations of Lambeau Field).

Rep @johnkriesel on e-pulltabs for Vikings stadium corp #wilfare: “This bill works. It has been fined tuned and it will build a stadium.”

That quote comes from May 7, 2012’s Hastings Gazette. While Governor Dayton has made some odd statements about how well he understood the funding through e-pulltabs, it was Kriesel’s bill. And here was Kriesel boasting about how well it was going to work to keep Vikings fans from having to pay what Wilf wouldn’t toward a new stadium. 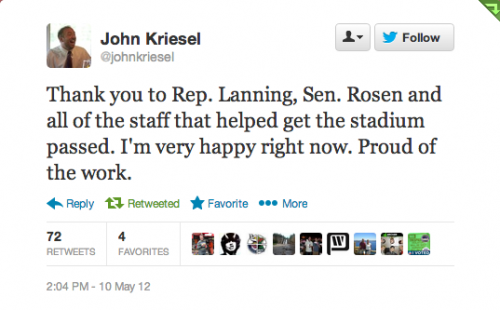 He seemed quite excited at the time that he, together with GOP Rep Lanning and GOP Senator Rosen, had successfully the legislature and governor that exploiting gamblers through an unproven form of gambling would be a sound way to subsidize the most profitable sports league in the country. 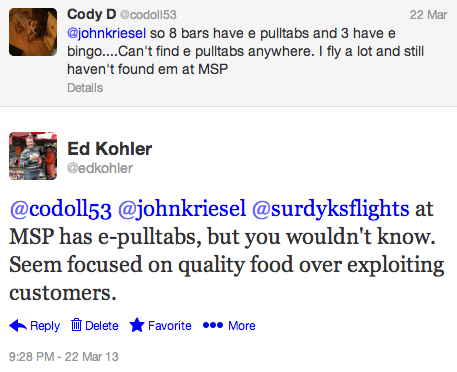 Surdyk’s Flights is one of the better restaurants at MSP airport, with excellent food and wine. Which, as we’ve learned from the revenue generated from e-pulltabs to date, are generally not the terms used to describe the venues most successful at exploiting gamblers. Nope. The venues most successful at subsidizing Vikings fans – thanks to John Kriesel – are venues serving cleintelle much closer to the poverty line than the average Surdyk’s Flights patron.

Here’s one other thing that cracks me up about John Kriesel. He’s been on Twitter for over three years, and in that time he’s favorited only two tweets. Here they are: 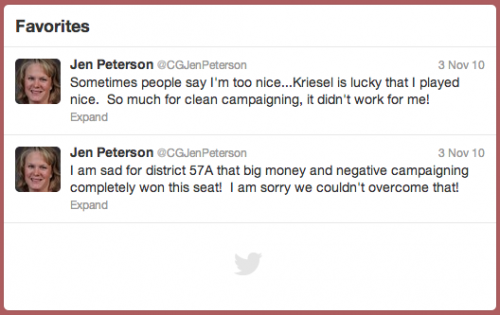 Kriesel doesn’t seem to appreciate having his legislative failures celebrated, but is cool with being a bad winner based on his Twitter behavior.