Among the locations in the red are two of the very first locations to install e-pulltabs: O’Gara’s and Mancini’s in St Paul. Here is how they’re doing: 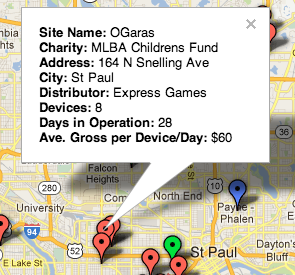 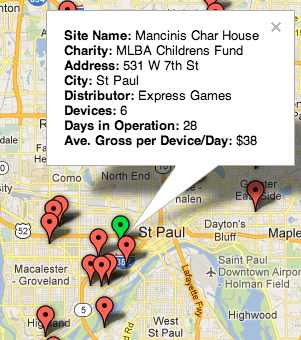 When the pioneers in e-pulltab gambling exploitation are falling 73% and 83% short of projections, the problems seem severe. These are also popular bars in Minnesota’s second largest city. O’Gara’s advertises e-pulltabs with a banner at their entrance and has received mentions in many news stories about e-pulltabs, so it’s hard to say that people going there don’t know they have them. In fact, the revenue started out well above expectations at O’Gara’s. The novelty is wearing off, so now they’ll settle in to a daily average based on the entertainment value they provide.

Perhaps one of the problems is that people aren’t interested in gambling to raise money for three private businesses (the Vikings, the e-pulltabs vendor, and the bar) along with the Minnesota Licensed Beverage Association’s charitable wing? Or, based on my experience trying them at O’Gara’s, perhaps the problem is that they’re anti-social and boring?

Regardless, this seems like a great opportunity for Vikings fans to find their checkbooks and prove that they support their team. But, what seems more likely is that they’ll head back down to the capital to beg for alternative funding sources from the state to make up for e-pulltabs shortfalls.