Governor Dayton thinks e-pulltabs will still come up with enough money to cover the debt payments on the money the state plans to borrow in order to provide corporate Wilfare to the National Football League:

He may be right, but I’m trying to figure out how.

Here’s how I look at it:

For the sake of argument, let’s assume – ridiculously – that the pace of e-pulltabs location installs immediately increases from a rate of around 30 per month to around 400 per month in order to hit the venue installation goal.

That still leaves us with a device/location problem. Currently, locations have around 4.9 devices per location installed rather than 6.2, which increases the number of venues needed to hit the numbers from 2,500 to 3,163. Another 663 bars have to be talked into running e-pulltabs.

That would solve the venue issue.

But, there’s another problem. The machines are only taking in $104/day when projections estimated $225. If that average holds, the number of e-pulltab devices needed to hit the numbers more than doubles from 15,500 to 33,534.

That would solve the device issue.

The short-hand way to explain this is that the average venue is doing around 1/3 what was projected, so we’ll need 3X more venues to hit projections. Or, this chart shows how the missed projections of both revenue per device and devices per venue creates a much tougher to reach goal: 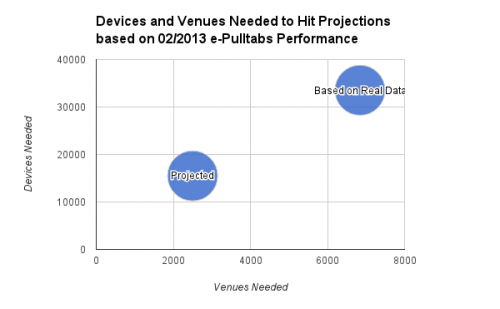 Now, here’s where I have a hard time understanding where Governor Dayton is coming from. How are we going to find 6,843 venues willing to host e-pulltabs when there are only ~2,800 venues in the entire state that host paper pulltabs today?

It would take one venue for every 786 Minnesota residents. Are there that many venues in the state? Or, do we need to expand venues to include gas stations, grocery stores, bar countertops, and everywhere else Las Vegas has installed screens in front of patrons in order to make the 30 years of debt payments Dayton promised to Zygi?

Can we really double the number of venues in the state that host gambling? If we could, should we?

What if it’s a good cause, like providing corporate Wilfare to an organization that’s perfectly capable of paying for its own infrastructure?

One thought on “What Would it Take to Make Up for Low Vikings Stadium E-Pulltabs Revenues? #wilfare”