I wrote the other day that it’s far easier to buy a home than many people realize. In that piece, I mentioned that the perception is that it takes as much as 20% down to buy a home. Here’s a perfect example of someone trying to sell the perception that it’s difficult to buy a home these days when it’s actually not. This comes from former Treasury Secretary under Bill Clinton, Lawrence Summers, writing in the Washington Post about what President Obama should address in his State of the Union speech:

Third, no American, regardless of his or her ideology, should be satisfied with the way the nation’s housing finance system is working. After a period when cheap mortgages were too available, the pendulum has swung too far; a lack of finance is holding the economy back. The clearest evidence is the growing number of lower- and middle-income families paying rents to the private-equity firms that own their homes at rates far above what a mortgage would cost.

Fannie Mae and Freddie Mac, the government-sponsored housing enterprises, have historically provided support to the mortgage market in difficult times. It is high time they be forced to step up and support would-be lenders. Ultimately, government support for owner-occupied housing should be curtailed, but now is not the time.

Here’s a snippet from Wikipedia about Summers’ role in the housing market back in 1999:

Summers hailed the Gramm-Leach-Bliley Act in 1999, which lifted more than six decades of restrictions against banks offering commercial banking, insurance, and investment services (by repealing key provisions in the 1933 Glass–Steagall Act): “Today Congress voted to update the rules that have governed financial services since the Great Depression and replace them with a system for the 21st century,” Summers said.[21] “This historic legislation will better enable American companies to compete in the new economy.”[21] Many critics, including President Barack Obama, have suggested the 2007 subprime mortgage financial crisis was caused by the partial repeal of the 1933 Glass–Steagall Act.[22] Indeed, as a member of President Clinton’s Working Group on Financial Markets, Summers, along with U.S. Securities and Exchange Commission (SEC) Chairman Arthur Levitt, Fed Chairman Greenspan, and Secretary Rubin, torpedoed an effort to regulate the derivatives that many blame for bringing the financial market down in Fall 2008.

It could be argued – and has – that the policies Summers pushed for back in 1999 lead to the housing market overheating through a combination of lax lending standards, the ability to turn home loans into commodities (make crappy loans, bundle those crappy mortgages into a package, pretend that they’re less crappy because they’ve become diversified crap), and a major lack of oversight on how these derivatives were handled (including fraud at every level of the lending process).

Now, we certainly have tightened things up from the point where people could get a mortgage for a home without proof of income, a down payment, or even a credit check, but it’s really difficult to buy Summers’ argument that “the pendulum has swung too far”. For proof of this, look at the National Association of Realtor’s existing home sales stats for 2012:

People are buying houses. Lots of people. In fact, pretty much the only times people have purchased more homes than they’re buying now were during the housing bubble, and for a short period when the government was offering up to $8,000 home buyer tax credits: 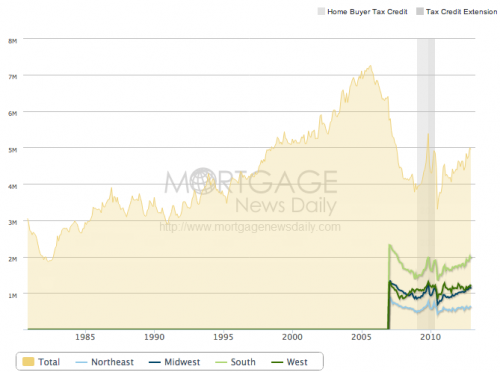 As I see it, home sales are up, for-sale inventory is down (leading to increasing home prices), which will likely lead to more people recovering from being under water on their homes (owing more than what they purchased their home for during the bubble), new condo developments are going up, and new single family home developments are breaking ground. These are not the symptoms of a real estate market where “the pendulum has swung too far”.

I’ve never been Treasury Secretary or President of Harvard like Larry Summers, but – from my perspective – I’m not seeing the problem that he’s claiming needs to be solved.