I discovered that Facebook has something similar to a junk inbox (inbox of messages from non-FB friends) that’s been accumulating messages over the past few years. I’ve really missed out on some gems. For example, here are messages I received related to the Vikings stadium fan subsidy debate:

Jon Wilson makes a compelling case for progressive taxation. He’s right. I can afford the tax. But, he didn’t explain why subsidizing his private entertainment and Zygi Wilf’s private business is a good use of my money.

This is the first time someone named Looney has called me irrational.

This comment comes from the Vikings fan named Tom (last name witheld) who was so over the top with email, social media, and phone calls that I took out a restraining order against him. Under the terms of our mediation agreement, I’m not using his last name.

It turns out that some adults can debate issues as adults. Thanks, Jeff.

Anna Jackson-Dudik seems to assume that there must be something wrong with my brain if I don’t think it’s good public policy to spend taxpayer dollars subsidizing the most profitable private sports entertainment league in the country. 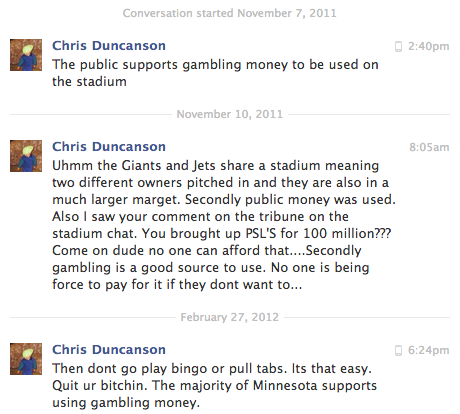 Chris Duncanson was busy. If I remember the polling went correctly the public did not support public financing for Zygi Wilf’s private business. However, given a choice of how they’d like to pay for something they don’t want to pay for, they decided that exploiting gamblers was the best option.

The Giants and Jets are in a far larger market than Minnesota. Yet, Minnesotans seem to believe that, even though our market can’t pay for a stadium on par with NYC, we still deserve a comparable stadium. Keeping up with the Joneses is a fine use of Duncanson’s own money but is a poor priority for the public’s. If the NFL would like to have a 31 billion dollar stadiums across the country, nothing is stopping them from building them with their own money. They can afford them.

If Vikings fans aren’t willing to chip in $100 million in PSLs (that’s around $5.55 per ticket per game over 30 years) they must be content with the Metrodome.

If the state can make money exploiting gamblers through e-pulltabs and bingo (and decides that it’s comfortable doing so), the conversation should be around what’s the best use of that revenue. If it was presented in that fashion, subsidizing Chris Duncanson’s relationship with the Vikings probably wouldn’t be at the top of the public’s priority list.

Peter Lynch raised some interesting points. Vikings fans often brought up the subsidies the non-profit Guthrie received to justify subsidizing Zygi Wilf’s for-profit business. They didn’t seem to understand (or care) that the Guthrie’s subsidies were nowhere near the levels Zygi Wilf was demanding from the public. Lynch points out that the differences only begin there. 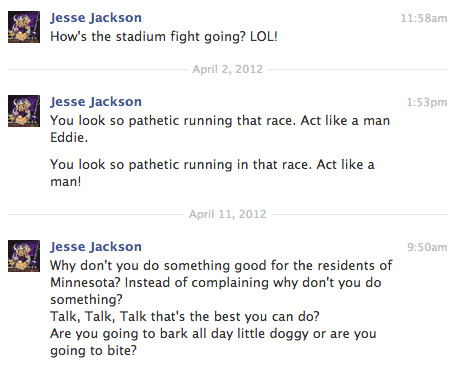 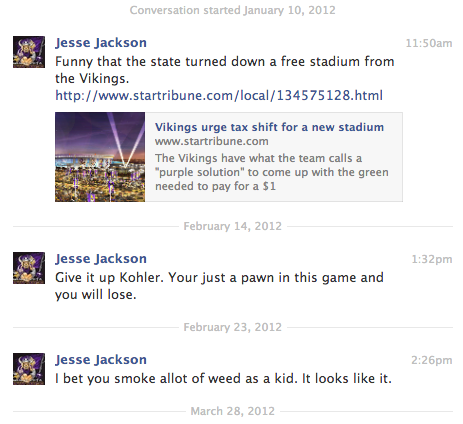 Jesse Jackson sounds very similar to Anna Jackson-Dudik. Perhaps this is why?

It’s almost like Jesse was posting using his wife’s account. Or Anna using Jesse’s? Or, two people who’re willing to fight for public subsidies of their private relationship with a private company, who both think “allot” is a word, managed to find each other. While the context of the movie quote doesn’t make much sense, I think Jesse/Anna/Allot and I can agree that Reservoir Dogs was an entertaining movie 20 years ago.

One thought on “A Vikings Stadium #Wilfare Mail Bag”