@edkohler How much do those Twitter sponsored placements go for, anyway, if you don’t mind me asking?

Vote No Twice to protect Minnesota’s constitution from discrimination . . . twice.

That tweet received at least 515 retweets, been favorited 166 times, and generated hundreds of conversations with people who didn’t share my political views. What did that cost? Here’s the breakdown:

The ad targeted people in Minnesota. I don’t know how Twitter does that, but it seems like it doesn’t rely entirely on what people put in their bio, so sharing your location through your device may impact which types of ads you’ll see.

86,500 impressions brings the CPM rate to around $8. There are cheaper and more expensive ways to reach people with an ad impression than that. I think this happens to be a great deal since the tweet resonated with more than 500 people enough to get them to share the message with their own followers. That kind of personal endorsement is the kind of thing that I was hoping for.

The cost per retweet came to $1.35. It’s a bit lower than that when old-school retweets are counted. If I offered to pay someone $1.35 to retweet a tweet, there is little chance they’d do it. But, with the right tweet at the right time shown to the right people, it happened.

I also picked up some new followers out of this: 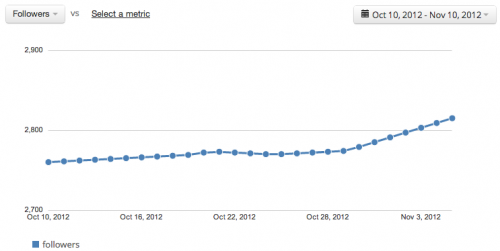 What was particularly cool about this is how smart and good looking the people who retweeted me were. They should get together and make babies (is that’s their thing).

Did I influence any votes with this? That’s hard to say. One type of action that may have motivated some people to get to the polls was seeing how bigoted some of the people supporting the marriage amendment were based on their responses to my tweet. Perhaps that got some people to show up to the polls?

I also spent some time attempting to engage with people tweeting the #VoteYes hashtag in favor of the marriage amendment. I generally used the four example tweets below to attempt to engage them:

What’s your justification for using the constitution to discriminate rather than protect Minnesotans? #VoteNO

I don’t feel threatened by other people having the same rights as you and me. Why do you? #VoteNO

Please keep the MN constitution out of the discrimination business. #VoteNO

How is your marriage threatened if other consenting adults have the same civil rights you and I take for granted? #VoteNO

Quite a few of these attempts to engage people in support of marriage discrimination were ignored. In those cases, perhaps I got them to think twice about their position? I know this much: no one responded and said, “You know what Ed? You’re right!”