@edkohler “Yellow Pages industry wins right to litter in Seattle. #PrintSpam” you mean like the 4 tons of postcards city sent out??

Yesterday, the Yellow Pages industry won the latest round in a fight with Seattle over whether (or how) Seattle can regulate the print-spamming of their city.

It’s one thing to litter yellow pages all over town. It’s another to expect the city to cover the cleanup costs for this unsolicited print spam.

Which brings us to yellow page’s print spam defender Ken Clark’s tweet posted above. Seattle got the word out about the enhanced city service that allows residents to opt-out of yellow pages deliveries through print postcard marketing. Not surprisingly, this also took paper. Four tons of paper according to Ken Clark. Now, compare four tons of postcards to the spam generated by the yellow pages industry every year in Seattle:

The city adopted the restrictions in 2010, saying that the delivery of the phone books to residents who didn’t want them generated 1,300 tons of waste a year and cost the city nearly $200,000 to dispose of. 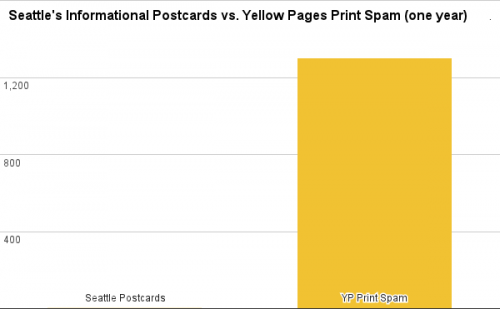 According to Seattle Councilmember Mike O’Brien, the city’s opt-out plan has been very popular with residents, and saved a ton (figuratively) and tons (literally) of YP waste:

Seattle’s opt-out system has been in place for more than a year now with overwhelming response. So far more than 25 percent of households and businesses have opted out of more than 435,000 phone books, saving over 400 tons of paper.

With a one-time mailing of four tons of postcards, the City of Seattle managed to remove 400 tons of unsolicited and proactively declared unwanted yellow pages from their waste stream. And that’s just the first year. Those were some powerful postcards. (The average household that’s chosen to opt-out has stopped the littering of 5.5 phone books per year on their property.)

“You know,” Norton said, “It’s funny. We’ve had conversations with elected officials across the country who were considering similar types of legislation, and nobody’s wanted to pass a bill like this … once they hear about the things we’re doing.”

Norton says the yellow-pages industry is changing, using 50 percent less paper than five years ago. The directories are only 35 percent ads, he said. The rest is made up of maps, stadium seating charts, government information and other helpful public information, he said.

If yellow pages are valuable, why did 25% of city residents take the time to proactively opt-out of receiving them? In 2012, how can a person find a map, stadium seating chart, government info, or “other helpful public information” without a yellow pages directory?

Seattle residents, who have to pay more taxes to clean up the YP industry’s print spam? Nope.

Seattle businesses, who’ll have to pay to place ads in directories that will never be opened? Nope.

Seattle’s government, that will have to find $200,000/year from somewhere else in the city’s budget to clean up the YP industry’s litter? Nope.

The YP industry, who can litter every household in the city with unsolicited print spam without consequence? Bingo.