I had a chance to catch Mayor RT Rybak’s Minneapolis city budget tour last week at the Becketwood senior home. Overall, the city is pays its bills and has a great credit rating, but I found a few nits to pick. For example, check out the blurry chart I snapped a picture of with my phone: 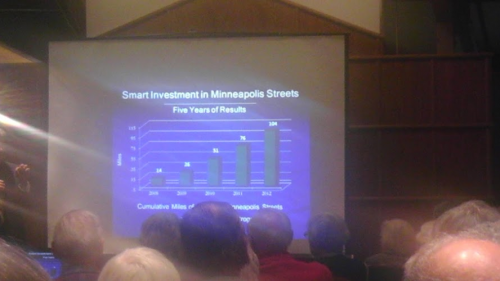 This is a highly misleading chart. A more intellectually honest representation of that data would be something like this, where we can see how many miles of road were refurbished by year: 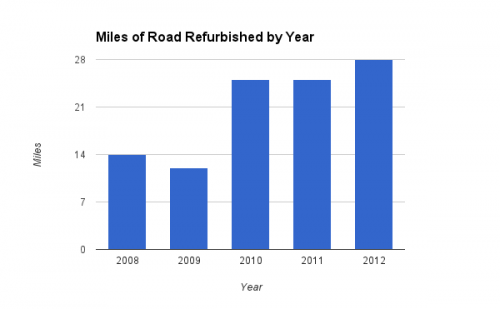 As you can see, the miles or road in Minneapolis receiving attention has still increased. It’s just not increasing at the rate the first chart suggests.

That’s a significant improvement that’s partially due to the city’s improved credit rating. However, if people are mislead by the chart presented to them in Rybak’s presentation, they may assume that every road in the city will be upgraded in the next 10 years. That’s not going to happen. What’s the right rate for refurbishing roads? I don’t know. Anyone have some thoughts on that?

Rybak also didn’t mention that the reason we didn’t have to pay $5 million toward the Target Center this year is because we’ve borrowed from the future. The sales taxes going toward the convention center’s mortgage that will be used to subsidize the NBA and NFL can’t be used for that purpose until the convention center’s debt is paid off in 2020. So, property taxes are staying steady because we deferred NBA subsidies and shifted the funding source.

Rybak mentioned that it’s time to lay the Twin Cities rivalry to rest. I’m cool with that. We could have done that and saved a boatload of money by sending the Timberwolves and Lynx to the Xcel Energy Center. Instead, we’ve decided to double down on the Target Center, which lead to St. Paul crying foul, which lead to St Paul getting funding for some Xcel Energy Center debt relief and funding for a new Saints corporate welfare project/stadium.

As Finance & Commerce reported back in March, Minneapolis’ bailout of Target Center was supposed to help attract an NHL team to the stadium.

Local developer Steve Minn was a member of the City Council in 1995. He recalls sitting in the office of then-Minneapolis City Council President Jackie Cherryhomes for a conversation with Gov. Arne Carlson and Taylor, who were both on the telephone.

At the time, efforts were under way to lure a professional hockey team back to Minnesota.

Los Angeles has two NBA teams and one NHL team all using the Staples Center, but the Twin Cities “needs” two arenas to host a mere 82 events (NBA & NHL combined) per year.

As mayor of St Paul, Norm Coleman created a net loser or a NHL stadium that competes with Minneapolis’ net loser of an NBA stadium.

So, the rivalry’s not dead. We have two construction projects in Minneapolis and one in St Paul that haven’t even broken ground yet that are stoke the rivalry. Maybe next generation?

Overall, the city is doing well, but could do better if we focused on the things that cause people to move to a city, GREAT SCHOOLS, rather than subsidizing professional sports franchises.