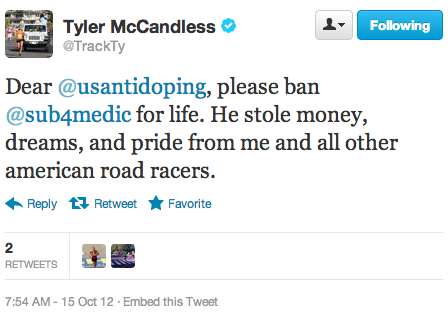 It turns out that Hesch has had a bit of an EPO habit. He’s admitted to boosting his blood’s ability to carry oxygen through injections of the banned substance.

Hesch, a self-described “profligate road racer,” said that over two years, beginning in August 2010, he injected himself with EPO 54 times before an empty EPO vial was found in his bag and he was reported to antidoping officials. In that time, he won nearly $40,000 in prize money in more than 75 races, including international competitions, United States championships and local road races.

The folks on the LetsRun messageboards saw this one coming, posting messages like this one more than a month ago:

Its going to be funny when this guy gets caught taking the juice. 4min mile then winning a half the next day with push ups thrown in.

Here’s an example of Hesch stealing money from his competition. The Jackie Bristow 5K was a small running race in San Dinmas, California this past January that raises money to fight eating disorders. Five seconds earned Hesch $200 in prize money that would have otherwise gone to Mark Batres:

If Hesch wants to put the past behind him, he could PayPal $200 to Mark Batres. A commenter on LetsRun feels the same way:

You will earn my respect when you pay back your ill-gotten prize money and not a second sooner.

Or, as someone who’s directly felt the financial pain of losing to the doper puts it:

One thing that’s pretty pathetic is Hesch uses the handle @Sub4Medic on Twitter. He brands himself based on a sub-four minute mile performance, which appears to be drug enabled. He became his own lie.

Even worse, Christian Hesch tweeted with glee when a suspected doper dropped out of the Houston Marathon in January. Drew Wartenburg called Hesch out on that one:

Hesch doesn’t seem to get the seriousness of what he’s done. For example, he claims to have “admitted voluntarily” to his violations:

Attempting to get ahead of bad news is not the definition of “admitting voluntarily”. If he can’t see that, he’s got a long ways to go to earn back his reputation.

Another disappointing aspect of this is the actions of Nike Team Run LA, based on the NY Times’ reporting describing their knowledge of Hesch’s doping in August 2012:

It was the last race he won before Nike Team Run LA teammates found an empty vial and confronted him.

“It was a weird situation to be in because you only read about top athletes doping,” said Justin Patananan, the captain for the Nike Team Run LA men’s group. “We gave Christian the liberty of dealing with USADA when he thought the time was right.”

Nike Team Run LA’s lackadaisical approach to dealing with their doper had consequences. Weeks later, Hesch won a half-marathon in Oregon and won “$500 in cash, a Riedel Decanter trophy and Double Magnum of wine from Ken Wright Cellars.”

That money and those wine gifts belong to Aissa Oghoughi:

Here’s Hesch with the wine he stole from Oghoughi: 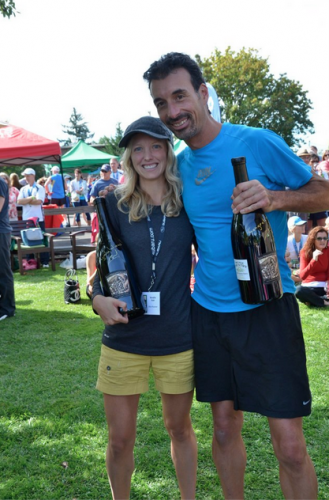 Nike Team Run LA’s known doper pretended to be a role model for young racers while wearing Nike gear, all the while knowing that his lies were catching up with him: 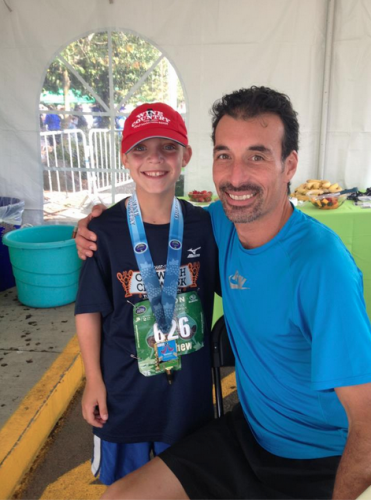 Hesch certainly could have done better. One way he could do better now is to not only get clean but to contribute to the sport by naming names of other dopers. The NY Times reported:

[Hesch] made the two-hour drive to Tijuana three times. On this first visit, another runner recommended pharmacies that other Southern Californian runners preferred. But since then he has chosen to find his own.

What does that mean, Christian? Perhaps you could live up to what you’ve said in your most recent tweet: 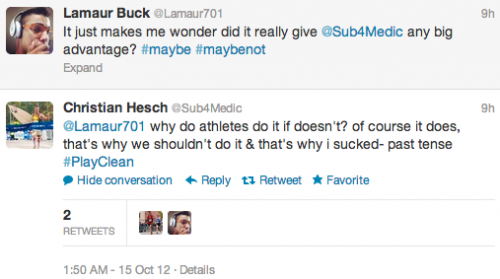 If “we” shouldn’t do it, then name names.

Help clean up the sport by sharing what you know.

If you chose to run clean in the future while knowing of others that aren’t, you’re still harming the sport for other clean runners.

Who is the “another runner” referred to in the NY Times article?

Who are the “other Southern Californian runners”?

Who else do you know across the country who’s doping?

If you want to improve the lives of the clean runners you’ve screwed, naming the names of other doping runners would be a good start.

For Hesch’s perspective, check out his apology letter at Competitor.com.

UPDATE: Runners World has more on Nike Team Run LA’s lackadaisical approach to dealing with dopers on their team.

I don’t think Hesch helped himself by throwing his former team under the bus in interviews with Runners World:

On the September 11 call, when asked about the conference call with Nike Team Run LA members, Hesch said, “There’s no admission of anything there. What am I to admit to? There’s no point of admitting to them something that has never happened.” On the September 11 call, Hesch also said that he had removed himself from the Nike Team Run LA roster because of “displeasure with the way the team has been directed.”