I’ve had a chance to get out for some runs recently with people who did’t follow the Vikings stadium financing debate as closely as I did. One thing that seems to surprise them is how much money the City of Minneapolis ended up committing to the deal. Best case scenario, the City of Minneapolis is on the hook for $675 million between construction, interest payments, operating, and capital improvement costs. And that’s if you don’t count the valuable downtown real estate that the stadium will occupy property tax free.

I had a chance to hear Mayor Rybak make his pitch for why this was a good deal for the city at a Drinking Liberally event at the 331 Club. One thing that he brought up there is that the taxes dedicated to the stadium (currently paying off the convention center debt) are “Robin Hood” taxes. The idea here is that these taxes tax the rich while giving to the poor.

However, here’s the breakdown of those taxes and how much is collected from various sources:

While there certainly is some revenue generated from visitors to Minneapolis who stay downtown on expense accounts (and people who visit Minneapolis from other cities and states for other reasons, including working downtown) it’s pretty darn clear that a huge chunk of the revenue generated from the Viking stadium and Timberwolves arena corporate welfare taxes come from city-wide sales taxes: 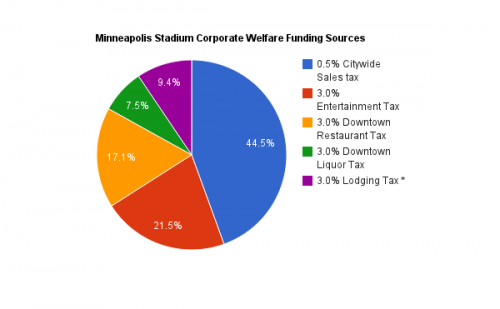 Outside of the lodging tax (which accounts for less than 10% of Vikings and Timberwolves corporate welfare funding) it seems pretty clear that Minneapolis residents (living downtown and throughout the city) are coughing up a huge portion of each of those pie slices.

The city-wide sales tax is not a Robin Hood tax (sales taxes in general are not since people who have lower incomes spend a larger portion of their income in taxable purchases than those with higher incomes). It hits every purchase from kids buying candy to parents buying toilet paper. Pretty much anything purchased in Minneapolis outside of groceries, clothing, and services purchased will help subsidize the Vikings and Timberwolves.

Entertainment tax: If you’ve ever wondered why your beer costs so much at First Avenue, here’s one of the reasons why. With every concert you attend to see an up and coming band, you’re helping subsidize Zygi Wilf’s Deleware corporation NFL franchise.

Downtown Liquor Tax: If you went to Northern Spark and bought a beer while checking out the work of starving artists, you helps subsidize Glen Taylor and Zygi Wilf’s bottom lines. When I been to First Avenue for concerts, I haven’t seen a lot of wealthy people buying drinks. I see people who love music who’ll go out any day of the week to catch a concert. They’re doing their part to subsidize the NFL and NBA by doing something completely unrelated to corporate welfare dependent professional sports franchises.

By the way, if you wanted to mislead the public about how much you’re taxing the average citizen for the benefit of private corporations, one way to do it would be to tilt the pie charts. That’s what the City of Minneapolis did (PDF) in their annual report on this tax revenue: 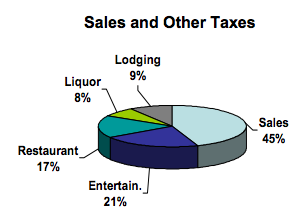 Kinda downplays the regressive taxes, eh? Sucks to be a music fan in this town.

Having the highest downtown sales taxes in the nation may not be the best way to draw conventions, when the vast majority of conventioneers won’t see any benefits from the additional taxes they’re paying. When their taxes went to the convention center it may have made sense. But, not we nee to you explain to summer convention organizers why all of their attendees will have to pay an additional 3% on their rooms, 3% on restaurants, and 3% on drinks to subsidize stadiums and arenas they won’t use (with a RARE exception).

Let’s be clear: This isn’t going to bankrupt the City of Minneapolis. It’s just a matter of priorities on how to best use taxes collected city-wide and in downtown (should collect them at all). Are you willing to believe that there was no better uses for $675 million in tax revenue collected in Minneapolis than to subsidize an NFL team’s stadium and an NBA team’s arena? Me neither.