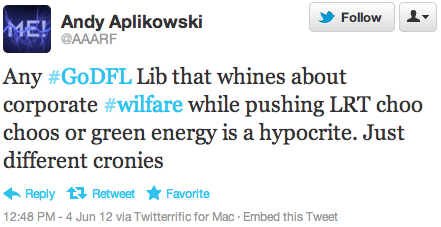 One of the interesting things about the Vikings stadium debate was the unusual coalition that formed between people on the far left and right of Minnesota politics in opposition to ginormous corporate welfare giveaway (with gambling as the revenue source).

On the right were legislators who opposed new taxes, opposed gambling as a revenue source, and opposed violating the Minneapolis City Charter in order to impose taxes on Minneapolis residents without a referendum.

On the left were legislators who opposed giving corporate welfare to a company that clearly does not need it (especially when the amount is so great that it exceeds the revenue the business would generate for the state over 30 years), opposed gambling as a revenue source, and opposed forcing Minneapolis to pick up such a large portion of the tab for a state facility that happens to be in Minneapolis.

But, now that that’s over, it sounds like things are returning to their usual political divisions, as Andy Aplikowski’s tweet suggests. Folks on the far right will continue to oppose subsidies of forms of energy that don’t cause asthma in kids. And continue to oppose transportation plans that move large numbers of people in and out of the urban centers without destroying even more urban neighborhoods.

Folks on the left will continue to push for increases in the percentage of clean energy created within the state of Minnesota, and efficient transportation options in/out/within urban areas.

Hopefully, the next bill sold as a jobs bill will build something that benefits the public rather than as a subsidy for a private business. At least that would be a bit closer to matching the role of government.