BLOOMINGTON, MN – Vikings fans gathered at the Mall of America at noon to demonstrate their lack of financial support for a stadium. Fans called upon state legislators to extract money from Minneapolis taxpayers, and gamblers across the state, to subsidize their game day experience to the tune of $77 per ticket for the next 30 years.

Fans were joined by Vikings defensive end, Jared Allen. Allen, who’s $73,260,000 6-year contract with the Minnesota Vikings would cover nearly half of Minneapolis’ $150 million share of the stadium construction costs, asked fans to extract money from thousandaires for the benefit of millionaires.

Governor Mark Dayton also attended. He encouraged fans to call legislators to vote to redistribute money from non-Vikings fans to a private business owned by a guy in New Jersey to make up for the lack of stadium support from local businesses. Thirty years ago, Dayton Hudson Corp was the second largest private donor to support the construction of the Metrodome in Minneapolis. As a percentage of stadium construction costs, Target Corp today would need to put nearly $18 million toward the construction of the stadium. So far, Dayton has failed to convince a single private business to contribute a single dollar toward building a new NFL stadium.

Minneapolis Mayor, RT Rybak, did not mention that the costs just for the City of Minneapolis portion of the stadium bill are projected to be $675 million over 30 years (and could go as high as $890 million) to cover construction costs, interest on construction debt, operating costs, and capital improvement costs.

Vikings fans considered the rally – which asked nothing of fans but to call legislators to demand corporate welfare for a New Jersey businessman – a success worthy of a trip to Hooters: 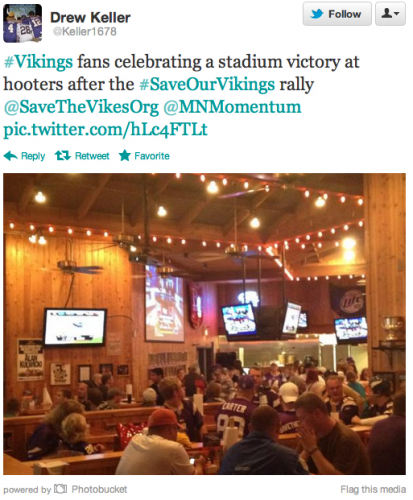