The Big 4’s Pat Kessler tweeted an interesting nugget regarding how Ted Mondale is misleading Minnesota’s legislature. Can you spot the error(s) here?

One person who didn’t was Vikings wilfare queen, @notch17, who seems to believe that, since $1.14b is nearly twice as much as $618m, the state would earn a 100% return on its investment in a new stadium.

So, how does Ted Mondale’s statement mislead politicians into believing what a wilfare queen like @notch17 is will blindly believe?

In a nutshell, both the numerator and denominator of Ted Mondale’s statement are based on what Zygi Wilf would like the legislature to believe rather than what the reality-based community understands.

The public cost is not $618m. While Ted Mondale would like to focus on only the state’s portion of the stadium financing costs, if you combine the state’s construction costs, Minneapolis’ construction costs, the debt on financing both of those contributions, the operating costs Minneapolis would contribute, and the capital improvement costs, the true public cost is $1.6 billion. That’s what the MN Senate’s projections state (embedded below). As Mayor Rybak has argued many times in legislative hearings, $1.6 billion will be collected by the state through gambling and sales taxes in order to cover the costs listed above. This money, as Mayor Rybak and Minneapolis’ city attorney have argued, could be used for anything the state wants to use it on. Meaning, the state of Minnesota choosing to spend $1.6 billion over 30 years to subsidize a business that would generate half a billion dollars less than that in state revenue.

If you gave me $3 and I gave you $2 back, would you feel like you’ve made a smart investment? If I was Zygi Wilf, I’d hope you’d think so. But, if I was a resident of the State of Minnesota who trusts you to spend state resources wisely, I’d think you were mathematically impaired.

The public costs vs. the Vikings’ revenue are listed below, or available at this link.

By the way, breaking even is NOT the bar here. At break even, having the Vikings in MN does nothing to pay for a teacher, a fireman, a bridge, road, etc. At break even, at least the Vikings wouldn’t be a drain on society. But, under the current stadium financing package, that’s what they’d be the the tune of around half a billion dollars over 30 years. The chart below compares the current financing package (in red) to the revenue that a privately financed stadium would generate for the state: 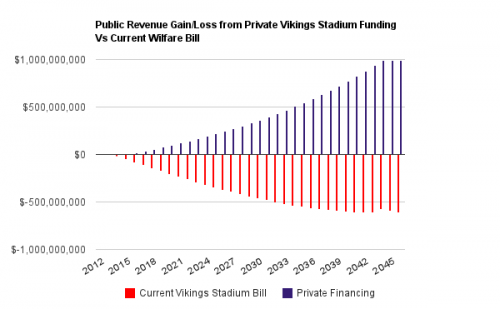 A $1.6 billion swing from contributing to the state’s economy to being a drain on it over 30 years.

Substitution effect. A sports economist and professor at the University of Illinois at Urbana-Champaign, Brad Humphreys, has a quote that addresses the absurdity of Ted Mondale’s math:

“As sport- and stadium-related activities increase, other spending declines because people substitute spending on sports for other spending,” Humphreys said. “If the stadium simply displaces dollar-for-dollar spending that would have occurred otherwise, there are no net benefits generated.”

No net benefits? In Minnesota’s case, the figure wouldn’t be entirely NO net benefits. Some people do come from out of state to watch the Vikings. But, the majority of the money spent on other stuff in the State of Minnesota, so it’s intellectually dishonest for Ted Mondale to give the Vikings credit for that state revenue. If Mondale was representing the public fairly rather than shilling for Zygi Wilf, he’d report the amount of money brought into Minnesota’s economy rather than how much money was directed to Wilf’s business due to hand picking (and subsidizing) a winner for a billion entertainment dollars at the expense of the state’s locally owned businesses.

The issue Mondale chooses to ignore is that the state makes the same revenue if someone spends the same amount of money buying a bike for their kid at The Bicycle Shoppe in Sen. Julie Rosen’s district or treats their family to a nice meal at Sarello’s in Morrie Lanning’s district as they would if that money was spent at a Vikings game.

However, it gets worse. The locally owned businesses in Fairmont and Moorhead are locally owned. As in, the money earned is earned by people who actually live here, unlike Zygi Wilf, who lives in a $19 million apartment on Park Ave in New York City.

And, the locally owned businesses do something else that Zygi Wilf refuses to do: they pay property taxes. Property taxes help pay for schools and cops in local communities. Zygi Wilf doesn’t live here, so could care less about that sort of thing.

“The People’s Stadium” is a Disgusting Term

When Ted Mondale and Mark Dayton call the Vikings stadium a “people’s stadium” they’re saying that the public will own it so Zygi Wilf doesn’t have to pay property taxes, can negotiate his rent down down to zero over time (like he’s done at the Metrodome), then threaten to leave.

For more on how ridiculous of a subsidy Wilf is demanding, check out Paul Udstrand’s analysis of what Wilf wants vs. what the state has done in the past for Northwest Airlines and the Mall of America.

What Should the Legislature Do This Session? Commemorative Bricks

One of the funding sources in the current Vikings stadium bill is to allow for the purchase of commemorative bricks to help pay for the stadium. While the Vikings stadium bill, in general, needs far more work to become equitable than what can be achieved in the short time left in the legislative session, the commemorative bricks portion of the bill deserves to be passed this year.

The bill should include an online registry of everyone who’s purchased a commemorative brick.

Then, every time a Vikings stadium wilfare queen contacts a legislator in the future, that legislator could cross reference that person with the commemorative brick registry to find out if that person is all talk. If they haven’t, the legislature could suggest to the constituent that they channel their passion into commemorative bricks first if they truly support building a stadium for Zygi Wilf’s business.

This would also help Vikings fans, like the ones at @dailynorseman, understand why statements like this are so ridiculous:

Frankly, the average Vikings fan has no idea how much money Wilf is demanding from the public relative to how much money Wilf’s business generates for the state, which may help explain why they are able to be so passionately in favor of such a horrible business decision.