The language of the current Vikings stadium bill says that the public is required to maintain the stadium at NFL standards and specifically mentions Indianapolis’ Lucas Oil Field as an example of what those standards should be. Put another way, if Indianapolis decides to waste their public’s money, we may be contractually obligated to do the same in an NFL arms race.

Sen. John Marty has taken time to read the current Vikings stadium bill, and found an interesting nugget that illustrates how bad of a deal this bill is for the public:

The current version of the legislation would leave taxpayers on the hook for large additional costs over the years for operations and capital improvements. The Vikings portion is limited to a three percent inflation increase, but the taxpayer share is subject to an ‘annual adjustment factor.’

Under the current bill, Wilf is able to lock in his annual costs, while the public cannot. Here is that in writing from the bill:

Capital improvements. The authority is directed to establish a capital reserve fund and is responsible for making repairs and improvements to the stadium. The state and NFL team are each responsible for contributing $1.5 million per year to this fund. The team contributions increase annually at a three percent rate, while the state’s contributions inflate based on the annual adjustment factor under article 4, section 1 (the rate of increase in the Minneapolis convention center taxes, but capped at 5 percent). 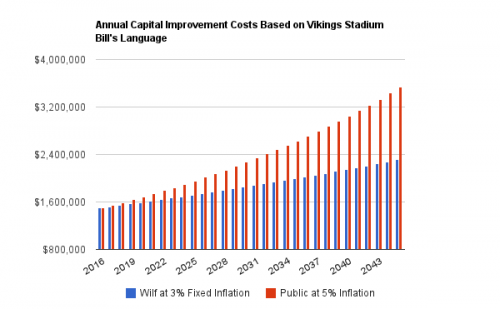 But, isn’t in possible that capital improvements wouldn’t be maxed out every year? Sure, it’s possible. But, the stadium bill also has language that sets up an NFL stadium arms race, so the public may be required to make capital improvements whether we can financially justify them or not:

Stadium operations; capital improvements. Provides for operation of the stadium in a first class manner, similar to comparable NFL stadium, such as the Lucas Oil Stadium in Indianapolis, Indiana.

That’s the type of language that got Hamilton County in Ohio (Cincinnati Bengels) in trouble. They had to sell a county hospital to cover the stadium costs they contractually agreed to cover.

But, what are Minnesota’s risks? Here are a few that come to mind:

1. Retractable Roof. Wilf has the option to add a retractable roof to the deal at his own costs. But, it looks like we’d be on the hook for maintaining a $120m structure he pays for. His maintenance costs are fixed, but he can increase the cost and complexity of a stadium that we have to maintain.

To see this in action, check out the corporate welfare terms the Colts cut with Indianapolis (large PDF) regarding who has to pay to maintain the retractable roof:

If someone buys you a $120 million addition to your house that you have to maintain for 30 years, with no option of selling, did you get a good deal, or inherit a money pit that you are contractually obligated to maintain?

2. Maintain the stadium AND the NFL’s headsets? The Indianapolis contract (which Minnesotan’s would be legally obligated to mirror) offers $50,000/yr in upgrades to stuff like instant replays and headsets.

It’s not enough that we’re building and maintaining the building? We have to pay for the NFL’s headsets too?

3. Network Neutrality. If the public wanted to invest in a wireless network in order to provide free WiFi in “The People’s Stadium” the public is out of luck. Under Indianapolis’ deal, the public is free to do so as long as the WiFi is disabled on game days (so the team can charge fans to use their own proprietary WiFi network): 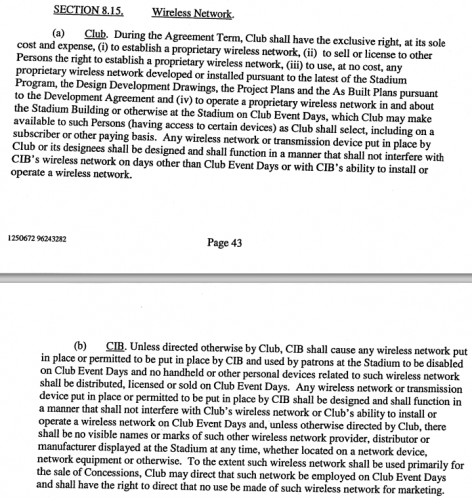 When the Twin Cities Marathon needs cops to monitor intersections, they pay for them. It’s built into the race fees. But, when the NFL needs cops to route traffic they expect the public to pick up the costs.

5. Training Facility. Would we be on the hook for maintaining Winter Park in Eden Prairie like Indy is for the Colts?

6. Parking Shenanigans. Will “NFL Standards” for parking change over time – as they have over time – in ways that contractually obligate Minneapolis to turn over more downtown land to the team?

At least Indianapolis was smart enough to put down in writing that the team needs to bring a Super Bowl to town under the terms of the contract (along with other NFL events that Minneapolis could request as well):

Have some pride, Minnesota. Rather than build a new stadium with the hope of getting a Super Bowl, write a couple into the contract.