During the Minneapolis City Council meeting earlier this week regarding giving $675 million of city tax revenue to Zygi Wilf’s business (in addition to the $400 million plus interest from the state [Yes, that’s far more than a billion dollars combined]), Cam Gordon ran the numbers on the property tax giveaway that would take place under the terms of the bill.

This is an additional Minneapolis tax giveaway in addition to the $675 million in city wide sales taxes and downtown restaurant and alcohol taxes that would be used to make debt payments on stadium construction plus a huge chunk of the annual operating costs of the stadium. 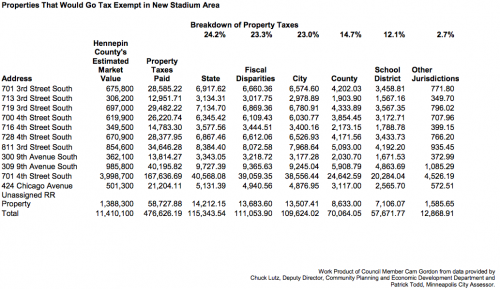 Property taxes for the land that would become tax exempt: $476,626.19. For one year. That’s more than a $14 million gift over 30 years if we ignore inflation. Tough break for the schools, hospitals, streets, and cops who depend on that money.

Actually, it’s not a tough break for them. They’ll still get their money. Property taxes are a game of whack-a-mole. If you whack $476 thousand dollars worth of taxable land, that $476 thousand shifts to the city’s remaining taxpayers.