I hope Sandy Colvin Roy, Kevin Reich, and Don Samuels are paying attention. While they may be willing to go along with Rybak’s argument that Minneapolis sales taxes aren’t Minneapolis’, the Vikings stadium bill also gives away tens of millions of dollars in city property taxes. This is a clear violation of the city charter that Roy, Reich, and Samuels have stated that they won’t vote against.

Back on March 26th, Minneapolis City Council Member, Sandy Colvin Roy, sent an email to her constituents (PDF), including me, explaining her decision to support the Vikings stadium bill based on the arguments Mayor Rybak, together with the city’s attorney, Susan Segal, have made regarding who controls a series of taxes (city-wide sales tax, downtown entertainment taxes, etc.) on Minneapolis residents. Based on that letter, she seems to be willing to ignore the city’s charter (city can’t spend more than $10m on a professional sports stadium without a vote) based on Rybak’s arguments.

However, it turns out that the Vikings stadium bill violates the Minneapolis City Charter in ways beyond the sales taxes Rybak and city council members have fixated on. The property tax giveaway alone violates the city charter.

Here is an excerpt from Sandy Colvin Roy’s letter that I find particularly interesting:

I stated that I will not violate the City Charter requirement for a referendum on stadium spending. I have not changed my mind, I will not do that. This plan depends on an extension of existing sales taxes which are collected in Minneapolis but are controlled by the State. Since that first hearing by the City Council last December, the City Attorney has stated that this plan does not trigger the referendum. This funding plan does not depend on the general fund. Once again, I believe that Minneapolis property tax payers will actually benefit from this plan.

Let’s assume for a second that Rybak and Segal’s perspective on whether the city controls taxes on the city is valid. I find that hard to believe, but let’s go with it. Here’s the problem: The Vikings stadium bill would STILL violate the city’s charter due to a $21 million property tax giveaway that seems to have gone unnoticed (or, has been proactively ignored) by the Minneapolis City Council.

The slideshow below shows the footprint of the proposed stadium (via Startribune infographic). It takes up a far larger footprint than the current than the current Metrodome, swallowing an additional 3-4 blocks of valuable downtown land. Land that currently generates more than half a million per year in property taxes for the city. Land that, under the terms of the current Vikings stadium bill, would be exempt from property taxes for 30 years. Screenshots of the property taxes for 2012 on each of the parcels are listed below. In addition, the city would be give up half a block of the city morgue’s property (which I estimate is worth ~$30k/yr in tax revenue based on comparable parcels):

Here is the language from the city charter regarding pro sports stadium funding:

The City of Minneapolis, Minneapolis Community Development Agency, or any city department, agency, commission, or board, shall use no city resources over $10 million dollars for the financing of professional sports facilities without the approval of a simple majority of the votes cast on the question, in a ballot question put to the public at the next regularly scheduled election. City resources are defined for these purposes as: Tax increment financing, bonds, loans, land purchase or procurement, land or site preparation, including necessary infrastructure such as roads, parking development, sewer and water, or other infrastructure development, general fund expenditures, sales tax or other taxes, deferred payments, interest free or below market interest rate loans, the donation or below market value sale of any city resources or holdings or any other free or below cost city services. The ballot question shall not be put before the public in a special election, in order to prevent the costs associated with special elections. (11-4-97)

An attendee at the Nokomis forum on the Vikings stadium brought up this point. He directly asked Rybak how much of a giveaway would come from property tax relief. Rybak said he didn’t know and asked if anyone did. I raised my hand to offer a some clarification on this for the audience but was not called on. Peter Tobias commented on this exchange (and glaring violation of the city charter) on the Minneapolis Issues list:

An important point was made by one member of the audience. The city not only directs its hospitality/sales tax towards Wilf but contributes also indirectly by exempting the real estate from property tax. According to the charter, every transfer of resources over 10 Mio to a sports stadium needs to be confirmed in a referendum.

The StarTribune captured that moment in their video from the forum. Here is the excerpt:

Rybak did not answer the question. Why? Could it be because it’s an objective case of the city charter being violated? Shifting taxable land within the city worth over $20 million in property taxes over 30 years to tax-exempt status to finance a professional sports stadium blows a massive hole in the city charter.

Let’s answer the guy’s question. Here is a breakdown of the 2012 property taxes for the properties that would be absorbed by the stadium and given property tax exempt status under the proposed Vikings bill that Rybak and seven Minneapolis City Council members currently support: 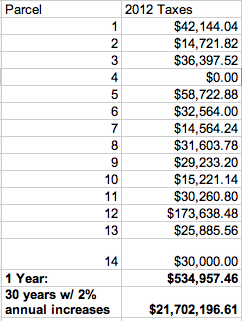 If we assume that property taxes will increase by an average of 2% of year for 30 years, the Vikings stadium bill shifts more than $21 million in property tax obligations to the city’s remaining property tax payers.

$16 million is more than $10 million. $21 million is more than $10 million. While Rybak seems to have convinced Sandy Colvin Roy and Kevin Reich that city sales taxes aren’t controlled by the city, the city charter is still being violated by the terms of the Vikings stadium bill. If Sandy and Kevin’s word is good, based on this information, they will stand by their statements that they will not violate the city’s charter.

This Should Flip At Least Three Votes

Three members of the Minneapolis City Council specifically mention in their letters of support for the Vikings stadium that they will not vote to violate the city’s charter. Here are their statements:

I will not take a vote on a Vikings stadium that violates the city’s charter. I am bound by the city charter and any city funding must meet the requirements set forth in our governing documents.

If Kevin Reich’s word is good, he can’t vote for the stadium bill since it violates the city charter by giving away $21 million in property taxable land to fund a professional sports stadium. Doing so would be in violation of the City Charter, which is something he clearly stated that he will not do.

I will not take a vote on a Vikings stadium that violates the city’s charter.

If Sandy Colvin Roy’s word is good, she can’t vote for the stadium bill since it violates the city charter by giving away $21 million in property taxable land to fund a professional sports stadium. Doing so would be in violation of the City Charter, which is something she clearly stated that she will not do.

As Minneapolis elected leaders who represent a majority of the City Council and theposition of Mayor, we stand ready to be the local partner for a stadium solution. We will not take a vote on a Vikings stadium that violates the City’s charter.

If Don Samuels’ word is good, he can’t vote for the stadium bill since it violates the city charter by giving away $21 million in property taxable land to fund a professional sports stadium. Doing so would be in violation of the City Charter, which is something he clearly stated that he will not do.

You know the Vikings stadium bill is bad when City Council Members don’t even notice a $21 million giveaway of city property taxes. Or, did they notice and decide to ignore this clear violation of the city charter while simultaneously stating that they’ll abide by the charter? Based on Kevin Reich, Sandy Colvin Roy, and Don Samuels actions, perhaps we’ll find out?

It May Be Even Worse

How many times over will the property tax giveaway violate the Minneapolis City Charter? Based on the plan outlined in the StarTribune, at lease 2X. But, take a look at this proposed site design: That design involves absorbing an additional four square blocks of valuable downtown real estate into tax exempt Vikings stadium status. Based on the value of those parcels (around $800,000 in property taxes for the city), the property tax giveaway could be in the $40-50 million range over 30 years if that plan was realized.

$40-50 million is far more than the $10 million threshold triggering a referendum under the city charter. I hope Sandy Colvin Roy, Kevin Reich, and Don Samuels are paying attention to the fine print in this plan, and are willing to stand by their written words.