I had a chance to testify at the MN House’s Commerce Committee hearing tonight on the Vikings stadium Wilfare bill. Thanks to Rep. Hoppe for holding a professional meeting.

The topic of the hearing was revenue sources. The current bill relies upon revenue from non-existant and unproven electronic pulltabs. They concept here is that kids these days just aren’t that in to ripping open paper pulltabs, but really like gidgets and gadgets, so the money will flow in like crazy if we could only switch to electronic pulltabs. Then, rather than give the windfall to charities, it would be diverted to cover a portion of Vikings fans and Zygi Wilf refuse to pay for the stadium they claim to value.

I am a Minnesota, Minneapolis, and Hennepin County resident so could pay for a new stadium three different ways.

I cited a House research report on the state of pulltab revenue in MN called: 2006-2010: Industry under Stress that shows the decline in pulltab revenues over time. Here’s is that information in chart form: 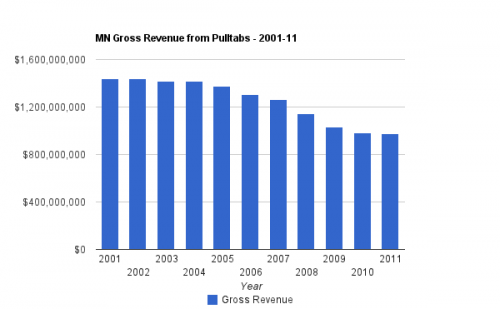 And a table of ten of those years:

I have a theory that the drop in revenue is due to far more interesting distractions in bars today: Smartphones. I used the following nuggets to attempt to make that point:

Then talked about the continued expansion of smartphone market share:

I asked the committee if they could get their kid to put down their iPhone to do pulltabs.

And, I stated that a group of people sitting around a table with a pitcher of beer ripping pulltabs may put down their pulltabs if they were each given an iPhone.

And, I mentioned that smartphones are only getting cheaper, so they should continue to grow.

I also asked the committee if they really believed that the Vikings would never come back to the public to ask for a reduction in their lease – pointing out that the team is owned by real estate professionals. Is that a reliable funding source?

Then a few dozen Vikings fans who, like me, want to see a new Vikings stadium built (as long as they don’t have to pay for it) spent their evenings insulting me on Twitter. I spent my evening retweeting them. Patrick Phenow got a kick out of it:

Shortly after hearing my apparently non-persuasive testimony, the bill passed out of the commerce committee on a voice vote. The first of many hurdles passed in a legislature that doesn’t seem particularly interested in explaining to voters in their new districts why they voted to borrow more than half a billion to subsidize a Vikings stadium before paying back the money that has been borrowed from schools.

There are still many opportunities for the legislature, Gov. Dayton, and Mayor Rybak to lead on this issue by asking fans and local businesses to chip in now to reduce the public’s debt costs.

As the bill’s sponsor, Rep. Morrie Lanning, pointed out during the hearing (which should have generated a record scratch and silence, but didn’t), the state’s debt payments will be around $42 million/yr. That’s around twice what the Vikings generate in sales and income taxes, so we can turn two dollars into one five hundred and fifty million times for Zygi Wilf’s benefit.