The latest Vikings stadium push poll hit the press on Friday. While early reports focused on regurgitation, local media outlets gained maturity throughout the day with some ignoring the push poll entirely.

The poll was conducted by Home Field Advantage. This is a group of local business and community leaders who are not interested in spending their own money to subsidize Zygi Wilf’s private business, but are cool with spending other people’s money to subsidize Zygi Wilf’s private business. With that in mind, how would you expect the results funded from a group like this to lean? Pro-wilfare? BINGO.

Among the first members of the media to regurgitate the poll results were FOX 9 and 1500 ESPN:

Fox 9 and 1500 ESPN gave Homefield Advantage exactly what they were looking for: Headlines suggesting that a poll conducted by a pro-Wilfare group are somehow relevant.

An exception to this was MPR, who’s first story preceding the official push poll release was titled: DIY: Stadium poll. The story by Tim Nelson begins:

Stadium supporters are rolling out poll results on the Minneapolis stadium plan later today at the State Office Building.

Home Field Advantage, the coalition of business and community leaders in Minneapolis, sponsored a phone poll of 1,000 registered Minnesota voters to gauge interest in building the Vikings a new stadium.

Nelson also embedded a copy of the poll conducted:

EXCEPT, that wasn’t the poll conducted. That’s what the poll looked like based on the questions Home Field Advantage decided to release to the public. MPR’s Tim Nelson tweeted a link to the unabridged questions asked in the poll, which included: 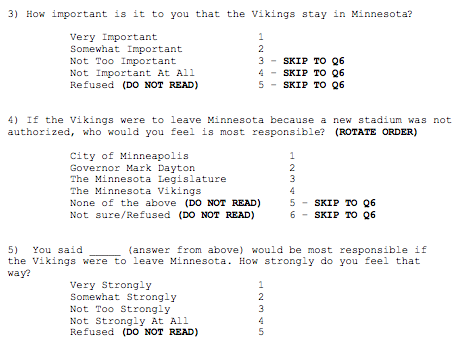 Why didn’t Home Field Advantage release the poll results to the question, “How important is it to you that the Vikings stay in Minnesota?”

Why didn’t Home Field Advantage release the poll results to the question, “If the Vikings were to leave Minnesota because a new stadium was not authorized, who would you feel is most responsible?”

Why didn’t Home Field Advantage release the poll results to the question, “You said _____ (answer from above) would the Vikings were to leave Minnesota. How strongly do you feel that way?”

Why? Let’s go with the obvious: The poll results to those questions must not have supported the positions they are trying to convince politicians, the media, and the public to take.

Why would the public feel that way? The poll was conducted over an absolutely beautiful spring week in Minnesota. In fact, it was so nice out that it reminded me of the beautiful fall days Minnesota has while people sit inside watching the Vikings on Sundays. Perhaps people realized that life goes on without spending more than half a billion dollars to subsidize 8 games (+2 preseason) per year of football? It’s not that they don’t like it, but realize that life would go on just fine without it.

Back to Friday March 23rd. Between the time the poll was released and when it hit that night’s news cycle, the Twittersphere got to the bottom of the riduculousness of Home Field Advantage’s poll. CityPages has a good roundup of this in Pro-Vikings stadium group releases pro-stadium poll, sparking Twitter controversy where they provided a round-up of tweets identifying the poll’s bias.

The headlines began to soften from what Home Field Advantage was looking for. For example:

That’s the media’s way of saying, “Here’s some BS for ya. We won’t actually call BS on the methodology of the poll, but at least we told you who’s BS’ing you.” 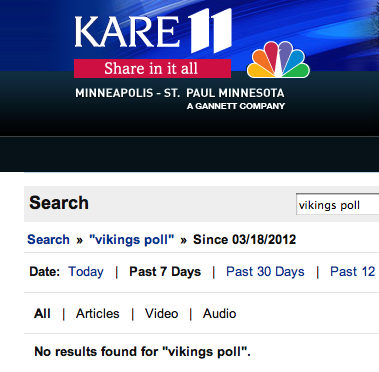 They do seem to want if you make it seem like the deal is far better than the deal actually is. Put another way: It turns out that misleading people can mislead people. Below is the single poll question Home Field Advantage released to the public with a few caveats to each question that they conveniently left out in their attempt to mislead 1,000 polled Minnesotans:

– The Vikings would fund over 50% of the stadium’s construction and operating costs over the life of their lease. (That is, if you don’t count the additional property tax free downtown land (increasing the tax burdens on property tax owners who’ll have to make up the difference, the tens of millions in tax exemptions for construction materials, the ability to run tax-free restaurants and other businesses on the property that compete with local businesses, and other tax benefits we haven’t identified yet.)

– A majority of the public contribution would come from gambling dollars, with no new tax increases or use of general-revenue funds. (Today, those gambling dollars are generated through pull-tab revenues, which historically have gone to supporting local charities, including nursing homes, homeless shelters, and many youth and amateur sports leagues.)

– The City of Minneapolis contribution would use existing city hospitality taxes and would not raise any new taxes. (The source of money currently used to pay off the Convention Center’s mortgage would be shifted to pay for a portion of a Metrodome replacement. The Convention Center is 20 years old with a leaky roof and needs to remain competitive with other cities in order to attract conventions.)

– Even though the Vikings would fund over 50% of the overall costs, the public would own the new stadium and it would be available for various public uses for at least 300 days out of the year. (By allowing the public to own the stadium, Zygi Wilf avoids paying property taxes on valuable downtown real estate. The current bill allows him to operate additional businesses on the property without paying property taxes. By not owning, Wilf is in a stronger position to negotiate his rent down to zero as he’s done at the Metrodome. He’s also in a stronger position to threaten to leave if the public doesn’t continue to spend hundreds of millions of the public’s money to continually upgrade the stadium to the NFL’s latest standards, whether the public can afford to or not. Oh, and did you hear that, while the public would own the stadium, Wilf would keep all of the revenues from the $100 million to $500 million in stadium naming rights?)

Based on this information, would you support or oppose a stadium financing proposal that used gambling and existing revenues along with a major contribution by the Vikings?

Based on more complete information about the true costs the public is being asked to take on, while also looking at the true benefits Zygi Wilf would receive, would those polled come in at 61% in favor? Or, would they be closer to the poll conducted by Survey USA that attempted to get a true feel for where the public stands on this issue? That poll found that 68% of Minnesotans support fully private funding for a new stadium (if one is built):

“Fully private” means Zygi Wilf can, and should, pay for his own stadium.

But Zygi’s business partners, the NFL, Vikings season ticket holders, non-season ticket holders who see enough value in the team to send Zygi a check, and Zygi can do what other Minnesota businesses to every day: Go to a bank and take out a loan. I don’t think Zygi would have a hard time finding financing for a new stadium. He could point to the StarTribune’s article on how much money he’ll make on naming rights. He can point to the revenue from parking, from concessions, from hitting season ticket holders with PSLs to benefit him rather than reduce the public’s debt, from rent payments on uses of the stadium on the 355 days (on average) that he wouldn’t be using it. And, he can point to the revenue from NFL TV contracts to show that he’ll have no problem covering the debt payments.

It’s a beautiful thing. Minneapolis and Minnesota can be great hosts and great fans of our local NFL franchise without directly subsidizing the business. We loyally show up to watch the games, buy merchandise, and watch the games on TV at an incredibly high rate. All of these actions make Wilf money, as they should. But, providing direct subsidies of more than half a billion dollars? We don’t have it, and Wilf doesn’t need it.