If you like big numbers that don’t mean much, check out this one from Cory Merrifield with Save the Vikes:

If Cory Merrifield had bothered to read the very next page of CSL’s report (flip from page 8 to 9 to see for yourself), he would know this. On Page 9, they explained:

A total of $33.2 million in personal income taxes and State and local sales taxes are estimated to be generated by the construction project.

$33.2 million in one heck of a lot less than $1.4 billion. Perhaps this chart will explain the difference between Merrifield’s misleading tweet and reality: 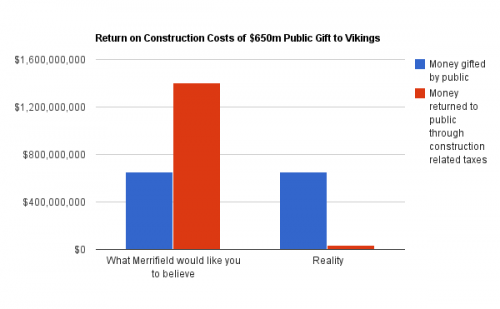 One of the reasons why the actual return to the public is so low is because the Vikings are demanding that their construction materials be tax exempt. I don’t know about you, but when I pick up construction supplies for my house, I see sales taxes on my receipt. In fact, if the state gave away $650 million for home improvement materials where the money had to be spent within the state, that would generate $44,687,500 back to the state through sales taxes, plus additional money through city and county taxes. Upgrading MN’s housing stock would actually pay more short-term, and more long-term through increased property taxes (another tax that we pay but the Vikings refuse to pay).