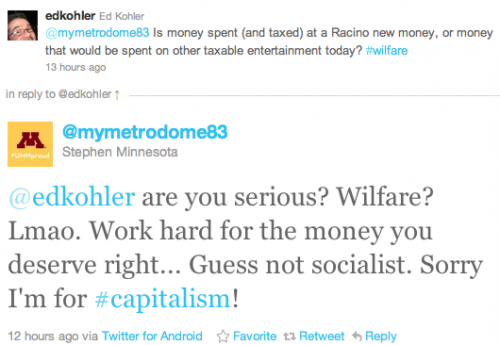 Here is a decent example of how fiscal conservatism breaks down when it’s presented with demands for corporate welfare from NFL franchise owners. 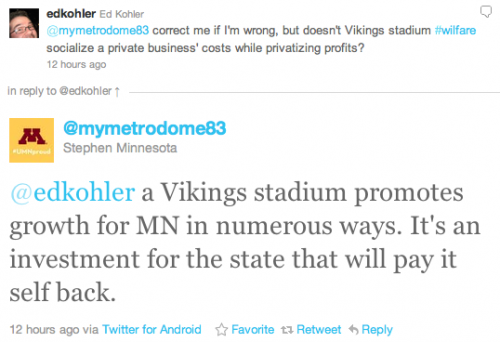 The fiscal conservative defends public investments in private businesses when the business is in the business of entertaining him 10 times per year.

He’s willing to assume that the NFL franchise wouldn’t ask for so much corporate welfare that business would end up being a financial drain on the public over the next 30 years.

It doesn’t matter to him that the business is perfectly capable of raising money privately for a stadium. We should extract it from the public on behalf of a private business instead. 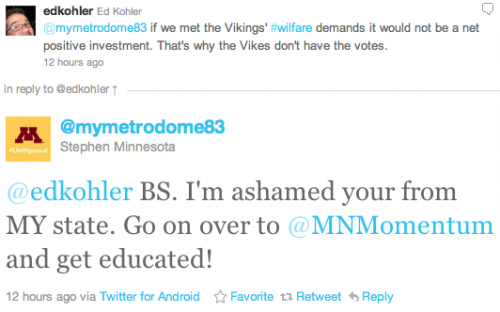 He seems to believe things that even the Vikings don’t claim to be true. The Vikings paint as rosy a picture as possible about the financial impact of the stadium, but they’re not stupid enough to claim that publicly subsidizing 30 years of NFL games at a cost of more than $2 million per game makes financial sense for the public. 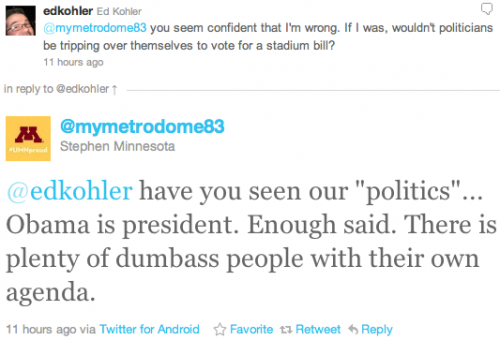 Apparently, politicians are stupid if they aren’t willing to extract money from Minnesotans through taxes on behalf of a New Jersey businessman who happens to own a local NFL franchise. I’m willing to believe that there are politicians who would vote in favor of corporate welfare for an NFL franchise, but the lopsidedness of the plan would have to at least a bit more favorable for the public than what the Vikings franchise has been demanding. Politicians may be willing to hold their nose and vote for a Vikings stadium corporate welfare bill, but not one that includes spending $200 million to build a 21,000 car parking lot in Arden Hills. 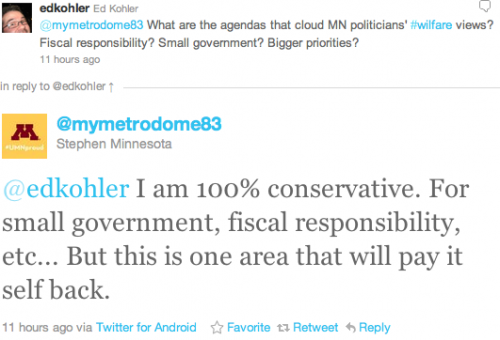 Generally, people who are “100% Conservative” don’t support borrowing $650,000,000 and making debt payments on that money over 30 years so we can offer a grant to a company that employs a few hundred people. People who are “100% Conservative” would generally let the market decide if building a $1.1 billion stadium for 300 uses over 30 years makes financial sense. The NFL franchise, local businesses, the NFL, and fans can work together to make that dream a reality if that dream makes financial sense. Sometimes dreams fall apart when economic realities set in.

Generally, “fiscal responsibility” folks support investments that have a shot at a net positive return.

The lack of understanding of how a dollar put into a slot ends up in Zygi Wilf’s pocket is shocking. I tried to explain it to him: 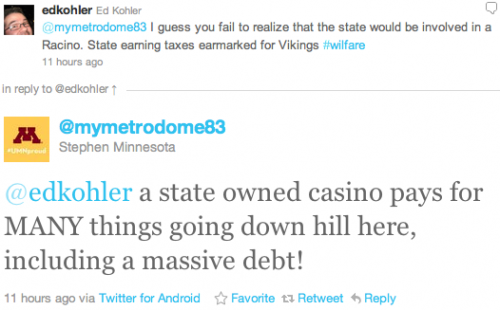 He didn’t seem to get it. I gave it one more try: 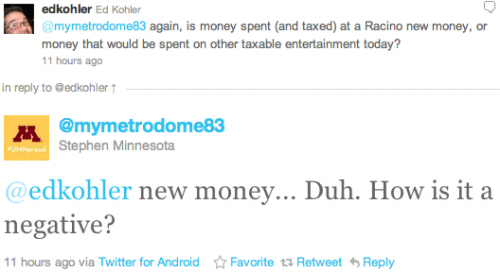 Just another corporate Wilfare supporting self-proclaimed conservative who favors extracting money from the public through state-run casinos so it can be earmarked for a private business owned by a guy in New Jersey.