Tom Scheck with MPR reported on Friday that the GOP is considering firing Ellen Anderson from her role on the Minnesota Public Utilities Commission on this coming Monday:

Deputy Senate Majority Leader Julianne Ortman said today the senate will vote on Anderson’s confirmation Monday. If the senate rejects her, Anderson is effectively fired from the job. Ortman said Anderson’s policies are unfriendly to businesses and ratepayers and are not in line with the views of most Minnesotans.

“She’s got a tough record for job providers, job creators, the ratepayers,” Ortman said. “Her work has created some controversy. It makes it very difficult to confirm a commissioner who is as controversial as she has been.”

Controversial, eh? How controversial? Check out this nugget from KARE-11’s John Croman:

That doesn’t sound like the behavior of a controversial figure to me.

But, I decided to take Sen. Ortman at her word for a bit longer by taking a look at the controversial votes Ellen Anderson has made during her time as chair of the PUC. If the votes Anderson made were highly controversial, surely there would be newsworthy, so I checked Google News for the term appearing in news stories in 2011:

How many stories could Google News find about controversial votes by Anderson in 2011? None.

So, I dug deeper. I did manage to unearth a story on the StarTribune from December 2011 about a vote Anderson cast:

Otter Tail Power Co. of Fergus Falls, Minn., says it needs a $489 million retrofit of the 36-year-old Big Stone power plant in Milbank, S.D., to comply with regulations to limit air pollutants that cause haze in the Boundary Waters Canoe Area Wilderness.

Environmental groups had argued that extending the power plant’s life would be a costly mistake because of rising coal prices and likely future regulation of greenhouse gases, but the Minnesota Public Utilities Commission voted 5-0 to endorse the retrofit as “prudent.”

“We’re deciding whether the Big Stone plant is going to run for many, many decades to come,” commission Chairwoman Ellen Anderson said moments before the vote.

Wait a second. If I’m reading that right, Anderson voted with the majority to unanimously approve retrofitting a coal fired power plant.

I also found a story on the Pioneer Press’ website about a PUC decision where Ellen Anderson was quoted.

Wait another second. Is that a story about a power company being allowed to run a power line across an Indian reservation against the tribe’s wishes? Indeed it is. That was not stopped by the PUC. Was this an example of Anderson casting a dissenting vote?

The five-member commission voted unanimously Thursday to close discussion on a request by the band to revoke or suspend the route permit for the 70-mile, 230-kilovolt line between Bemidji and Grand Rapids in northern Minnesota.

I’m not seeing what Sen. Julianne Ortman claims to be seeing.

Perhaps the following screenshot of a StarTribune.com search result will help provide some more insight into how odd Sen. Julianne Ortman’s statements are when compared to Ellen Anderson’s record while at the PUC. The screenshot below contains EVERY story and blog post published by the StarTribune between May 12, 2011 and Jan 27, 2012: 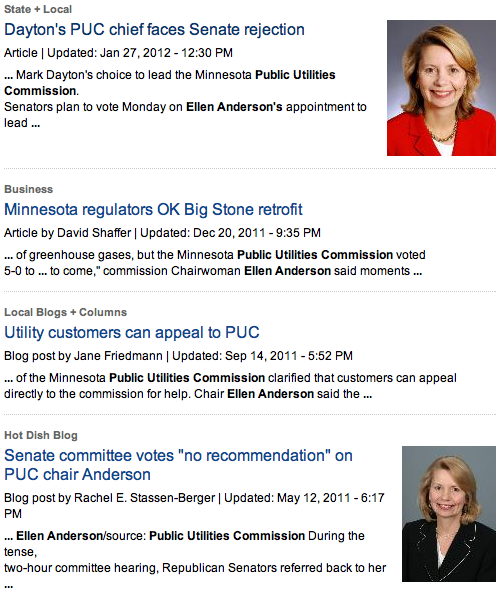 By the way, the second to last story in the StarTribune screenshot refers to this whistleblower blog post about an Eden Prairie woman who was overcharged by Xcel Energy for years due to a “meter mix-up”. Anderson is quoted saying that the PUC is “aggressive in regulating the utilities under our purview and do the utmost to protect the public interest.” Is looking out for consumers who have been overcharged for years by our government granted monopoly power company the type of controversial behavior Sen. Ortman is referring to?