How so? Based on the spike in Canterbury Park’s stock price (Ticker: CPHC) in the day following Senjem’s promotion to MN Senate Majority leader, it looks like Senjem is a $4.6 million man. Or, a man with a plan with odds of being fulfilled that have been priced at $4.6 million by the market: 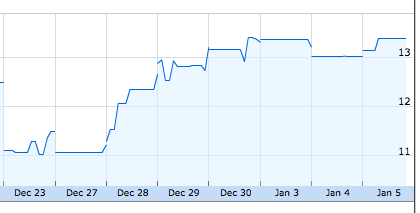 Post market close on December is when the news of Senjem’s new leadership position was announced.

Why is Senjem worth so much to Canterbury? He’s the MN Senate’s #1 supporter of Racino.

Is this good or bad? If your name is on the following list, this is very good because you own more than 100,000 shares of CPHC:

In fact, Curtis Sampson saw his shares increase in value by nearly $1 million on December 28th.

But, if you’re someone who’d like to see Minnesota invest in people and companies that create products and services sold to people and companies outside the State of Minnesota – thus bringing new money into the state – rather than increasing exploitation of ourselves through increased gambling, this may not be the best news in the world.

39 thoughts on “Sen. David Senjem May Be Worth $4.6 Million to Canterbury Park”