On December 18th, Carly and I toured St. Anthony West and East neighborhoods of Northeast Minneapolis from the Mississippi to Central Ave starting on 11th Ave NE at Main and heading toward the river. We parked behind Elements Pizza at Broadway & Main. 11th Ave NE runs into Graco (Worldwide Leaders in Fluid Handling). The skyway runs between two of their buildings on a part of Sibley Street that is more of a parking lot for the company today. Heading south on Sibley, we passed the old Scherer Bros Lumber location on the Mississippi. The Park Board purchased the property in 2009 and working to reconstruct the land as park land. Here is a before shot from Google’s satelite view: 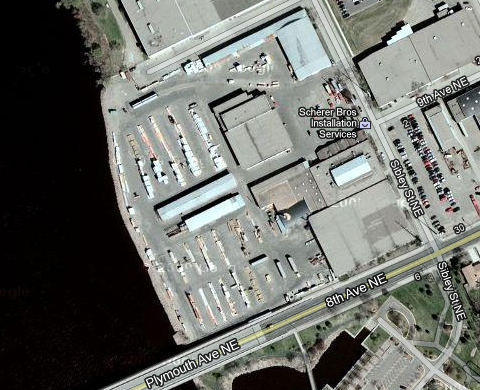 The Plymouth Ave Bridge remains closed. North and NE have been without a full set of bridges for quite some time now. Lowry appears to be closer to completion that Plymouth, where no work appears to be taking place. Elsie’s Restaurant, Bar and Bowling Center, on Marshall at 8th, is a neighborhood institution. I’m a fan. Across the street from Elsie’s, the North East Yacht Club seems to specialize in large macro brews. At least, that’s been my experience. St Anthony of Padua Catholic is on Main St at 8th. Established in 1849, it was the first Catholic mission parish established in Minneapolis.

Jesus is big in Northeast. When we reached Broadway, we cut back toward the river on 9th & 10th, where we ran into Catholic Eldercare. This nursing home, associated with St Anthony of Padua Catholic, raises money at Elsie’s through pulltabs. It will be interesting to see what happens to their funding if pulltabs start funding a new Vikings stadium. Battery City, at 9th & Ramsey, has come and gone. This sure seems like a good site for a brewery. Know anyone looking for a location? Heading back up from the river on 11th, we turned in front of the 1029 Bar. A must-include in any legitimate NE dive bar tour. At Marshall & 5th, we encountered the latest home of the Pioneers Statue. It dates back to 1935, was downtown until 1961, and until recently resided at the point of Marshall & Main Streets. Now it’s in the newly refurbished area on Boom Island Park across Marshall from its previous location. At the same corner is All Saints Catholic Church (Polish). Yes, there is a park called St. Anthony in St. Anthony Park. This picture is from Spring St near Jefferson St NE. I found a bar in Minneapolis that I’ve never been to or even heard of: Moose on Monroe. That will change. Crossing Central Ave, we circled around Lush. This was the location for the official HRC gala after-party (a classy gay bar). We started working our way back toward the river on Summer St. This small park is on Summer at Central Ave. Summer took us to 6th Ave NE, where we passed yet another church. St Maron’s Catholic Church (Maronite). St. Maron’s dates back to 1903, with the current church being constructed in 1948. At 8th, we looped through the small neighborhood tucked in between Elsie’s and Boom Island Park. Cool neighborhood. At the south end, I snapped this shot of the Minneapolis skyline.