Based on what I’ve read over the past week, it sounds like the Vikings stadium debate has become a catalyst for the MN GOP’s internal debate over gambling expansion, opposition, and party revenue.

Set aside for a second that it’s financially idiotic move for the public to borrow $650,000,000 on behalf of an NFL franchise to build a 21,000 car parking lot (plus stadium) for 10 uses per year. If financing a new stadium provides an excuse for expanding gambling in the State of Minnesota, that’s reason enough to back a stadium for some GOP members such as Racino backers.

Cyndy Brucato recently penned a piece at MinnPost where unnamed GOP insiders claim that Koch was knocked down a notch over her extracurricular activities due to her support for a Vikings stadium through increased gambling revenues (Stadium politics played role in Koch and Brodkorb dismissal, insiders say). While Michale Brodkorb hasn’t spoken on the record about what went down last week (or, over the previous 3+ months) the anonymous quote below reads most coherently to me when I assume it’s Brodkorb speaking off the record:

Brodkorb, a vocal stadium supporter, was seen as an effective contributor to the Vikings stadium discussion, which could have resulted in legislation in 2012 that uses gambling revenue to finance the project.

“The House Republicans didn’t want to deal with the issue before 2013,” said the source. “They wanted the Senate hearings to blow up, but they [the hearings] were in fact highly successful.”

CAGE (Citizens Against Gambling Expansion) gets financial support from the Minnesota Indian Gaming Association (MIGA), which advocates on behalf of Indian tribes, who vigorously oppose any expansion of gambling that would result in competition with Indian-owned casinos.

To get a sense of how twisted this is, check out this explanation from Citizens Against Gambling Expansion (CAGE) of the costs of “government-run gambling”. Keep in mind that this group is funded by Minnesota Indian Gaming Association (MIGA) while reading this:

If casinos only failed to deliver on their promises, then perhaps they could be written off as just another government boondoggle that fails to deliver on its promises.

Did you know that Las Vegas has more suicides per capita than any city in America? Or that about 8% of crime in areas with casinos can be attributed to gambling? Or that when you add up all the social costs of gambling, including bankruptcy, law enforcement, court costs, social services and lost wages, the cost of gambling outweigh the benefit by almost 2 to 1?

The simple fact is casinos cost the taxpayers a lot of money. Even if you leave aside the human toll of lives lost and ruined, the return on the investment for the taxpayers is simply not real. What does it matter if the state gets an extra $100 million if it costs $190 million to pay the extra expenses incurred?

Crazy, eh? Apparently, gambling has horrible side effects when casinos are government owned. Just ask the group that lobbies on behalf of the non-government owned casinos.

Casinos Against Gambling Competition would be a more accurate description of CAGE. Or, as Nick Coleman colorfully described CAGE back in May:

What is Citizens Against Gaming Expansion really? A protection racket, a shakedown, an obvious effort by GOP leaders to line their pockets.

Create the illusion of a threat, then be the people who need to be paid to prevent that threat from becoming a reality.

With that in mind, one of the proposals put forward in a recent MN Senate hearing on Vikings stadium funding was presented by the White Earth tribe:

White Earth tribal chairwoman Erma Vizenor was given 4 minutes for her testimony and wasn’t asked a single follow-up question. She offered the State of Minnesota $300 million and no one cared. How can that be?

Heck, Vizenor’s plan even involves building the casino at the Arden Hills stadium location, so you’d think someone like Ramsey County Commissioner, Tony Bennett would be in full support of this plan. But, Bennett was not sitting with Vizenor. He’s backing Zygi Wilf’s wilfare wishes at the expense of the State of Minnesota and Ramsey County.

Which brought me to Sarah Janecek’s recent series of Facebook posts titled “Follow the Money in the MN GOP (Parts 1, 2, 3, 4, 5, 6, 8 [there is no part 7]) where she’s been trickling out her theories on why gambling interests may have used Amy Koch’s extracurricular activities to push her out of a leadership position in the MN Senate. Which interests? From Part 6:

Now the question becomes what are the interests that would be opposed to the White Earth plan? I count three big guns. The first is the Minnesota Indian Gaming Association (MIGA), which, as I noted in an earlier post, represents 9 of the 11 tribes, but not White Earth. A casino smack dab in the Twin Cities (in either Arden Hills or downtown) would be a serious hit on the revenues at MIGA-owned casinos. MIGA will fight that tooth and nail.

The second gun is Canterbury Downs, which has put considerable effort into trying to get a Racino. Canterbury understands the big picture. The state and its public policymakers have extremely limited appetites when it comes to gambling. If White Earth gets a bigger bite of the apple now, it will be decades before Canterbury can work up state appetites for another bite.

The final gun is the Vikings, themselves. But this is the gun that cannot shoot straight. Zygi buys a $19 million apartment in NYC while begging middle class taxpayers to buy him a stadium. NFL executives park their limo in front of the Capitol while meeting with Dayton. Nevertheless, the reason why Zygi wants Arden Hills is that he wants to build the attendant development. He can’t have White Earth invading that space with a casino, hotel(s), bars and restaurants.

Canterbury’s opposition to the White Earth plan is obvious. They want a Racino, and expanding gambling on the opposite side of town does nothing to help them with their goal.

Zygi Wilf’s opposition makes good sense too. Wilf is a real estate developer who wants a huge chunk of heavily subsidized public land so he can build a series of private businesses that compete with existing non-publicly subsidized businesses. Having a casino with hotel as his Arden Hills neighbor would cut into his share of Vikings fans’ wallets. It’s much better for Wilf to have Tony Bennett force Ramsey County taxpayers to borrow $350,000,000 than to have a casino next door. Corporate welfare NIMBY-ism is Wilfare at its worst.

Which brings us to the Minnesota Indian Gambing Association. As far as I can tell, they’re pro-gambling expansion as long as it’s gambling within their association’s casinos. That’s understandable. It’s important to realize that they also throw a lot of money around to make that position well understood.

See. They’re not opposed to the White Earth plan due to competition. It just so happens that a coalition of Minnesota tribes that are doing quite well under the status quo do not want a tribe in the middle of nowhere to open a casino closer to the Twin Cities than any existing casino. 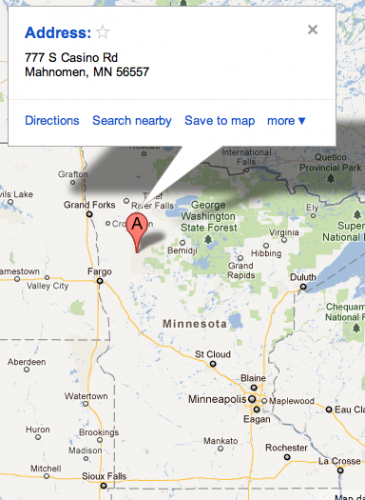 What I find interesting here is that Cullen Sheehan told MPR that he is the person who discovered Koch’s “inappropriate behavior” and reported it to GOP leadership. To me, it’s not clear whether Sheehan was really the person who discovered it, or if he was the first person of those who knew about it who decide it was worth confronting. (For example, assuming for a second that Brodkorb wasn’t the person Koch had an inappropriate relationship with, how would he not know about it while Sheehan did? Someone really should ask Brodkorb when he became aware of Koch’s “inappropriate relationship”. [Fine. I will.])

MPR’s piece on Sheehan’s perspective on the “inappropriate relationship” mentions this:

Sheehan is the first staffer to come forward to discuss the incident. He left the senate last month and is now a lobbyist with Lockgridge, Grindal and Nauen and wouldn’t say whether Koch’s behavior was the reason he left his state position.

I find that interesting. Why? Because Lockgridge, Grindal and Nauen represent the interests of Indian gaming. Firm partner, Ted Grindal, lists the following expertise on his profile:

It looks like Lockgridge, Grindal and Nauen’s Indian gaming connections are more closely tied to the MIGA’s interests than White Earth. For example, the Mille Lacs Band of Ojibwe (a client of firm partner, Ted Grindal) is a MIGA member.

To me, it looks like Sheehan’s actions led to Koch losing her position of leadership (obviously, it’s really Koch’s actions that did it), Brodkorb’s termination, and possibly a job for him working as a lobbyist at a firm representing gambling interests other than White Earth’s.

And then there are the four GOP leaders who called the press conference to chat about Amy Koch’s “inappropriate relationship”. Where do they stand on gambling? Here are some campaign donations that may help explain their positions:

Was Koch supporting the wrong form of gambling revenue for Vikings stadium wilfare? It looks like the GOP has profited from Indian gaming by opposing gambling expansion (MN CAGE), and leading along the Racino crowd for years (keeps the money flowing from both Racino and MIGA by giving Racino backers hope and making Racino seem like a threat to Indian casinos). By showing interest in a $300 million hand-out from White Earth, who doesn’t appear to have been as generous to the GOP as wealthier tribes, Koch may have pissed off both Racino backers, anti-gambling expansion shakedown artists, and anti-gambling purists.

Put that together with a group of senators interested in having the “Majority Leader” title next to their names, and I can see how Koch’s extracurricular activities could switch from scolding to coup material.

One thought on “Are the Amy Koch Scandal, Gambling, and Vikings Stadium Connected?”